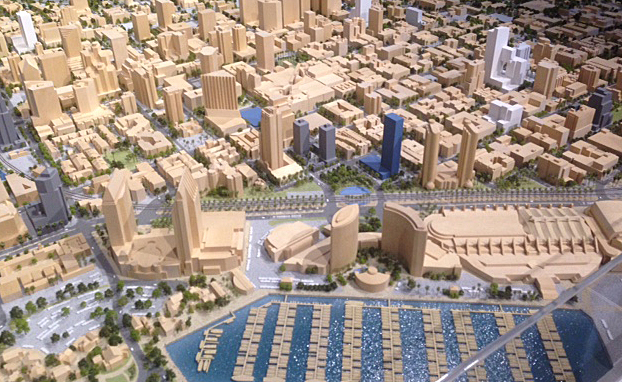 A Canadian wants you to understand your city, San Diegans — and, specifically, downtown. Sure, you think you know the best times to avoid the 163, how to nab a parking spot in the Gaslamp Quarter or how many blocks you have to walk from the trolley stop in Little Italy to the Embarcadero. But Nat Bosa is urging you to think again.

To aid you, the hands-on president of Vancouver-based Bosa Development has put together a free, public exhibition titled Rethink Downtown: Behind San Diego’s Skyline. Open daily from 11 a.m. to 5 p.m., the exhibition at 700 First Avenue includes a model (shown above) that identifies the properties owned by Bosa Development (dark gray buildings developed, blue underway and one clear that represents what Bosa Development calls its “vision for the future of the city”: the Pacific Gate residential tower).

“What do I see here? I see a helluva lot happening,” the unabashedly passionate Nat Bosa said during a media preview of the exhibition. “We are doing our part to truly give the city a new generation of residential high-rises. I think San Diego is ready for it.”

As he sees it, the city needs high-quality residential properties (especially for young “techies”), after which office spaces will follow, as employers will want to be near where the talent lives (and, Bosa said with a laugh, “I also want to build homes for the bosses”).

Jinsuk Park of the Kohn Pedersen Fox Associates architectural firm was in town for the event and noted that the iconic buildings in downtown skylines typically are commercial properties and that Bosa Development is out to change that “tradition” by becoming a “hero of downtown revival” with residential towers that are more architecturally compelling.

“The design is going to be clean, with a singular gesture,” he said, adding that residential projects fail when they involve too many components. KPF’s initial renderings for the 41-story Pacific Gate at the corner of Pacific Highway and Broadway showed “boxy” configurations. The third iteration was curved with four toes. The current rendering shows a sleeker, double-arc design with tapering, aluminum-wrapped mullions.

The exhibition was curated by Trevor Boddy (also of Vancouver), who is identified as a critic, curator, historian of architecture/urbanism and consulting urban designer. In illustrating the “Rethink Downtown” concept, he gathered pictorial examples from the city’s history to show how San Diego has reinvented itself to meet changing times.

In addition to the static displays are videos featuring interviews with people not only involved in Bosa Development projects, but also local residents with expertise and experience.

The exhibition’s goal to engage the public is clear in the accompanying catalog, which states, “Our fondest wish would be for this city to come to the realization that its most innovative designs and urban thinking are yet to come. Bosa has become San Diegan by choice, and we appreciate that other creative enterprises from technology and bio-science to architecture and development firms are now joining us here.

For further information on the exhibition, visit rethinkdowntown.com. 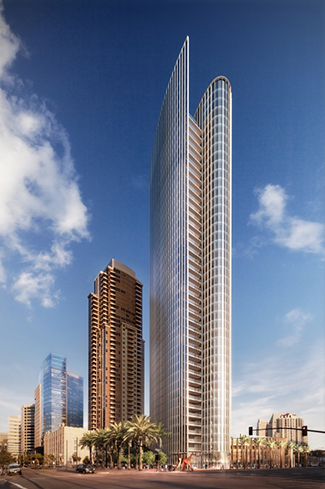