So Many Flavors, So Little Time 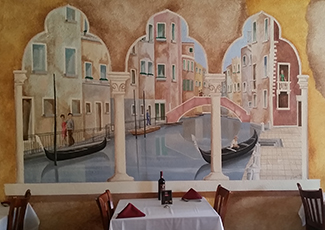 If you love food, a “taste of” event provides a stylish venue for nibbling on little tidbits of deliciousness throughout a pleasant afternoon. However, if you go to an inaugural “taste of” event, expect to chow down on mounds of mouth-watering yumminess and know that (a) you need to be hungry and (b) you need more than the four hours allotted if you want to enjoy all the platefuls offered. At least, that’s the experience I had at the Taste of South Park last weekend.

As a three-month-old newbie to Golden Hill, I figured that Taste of South Park would be an excellent way to acquaint myself with many (18) of my neighborhood’s restaurants. (OK, so technically, the foodie feast occurred in the no-longer-hood-but-neighborhood area of South Park, a block away from my house in Golden Hill. But South Park and Golden Hill are siblings whose birth mother is Greater Golden Hill, so close enough.)

Since this was a walkathon that covered several blocks, my daughter, Chelsea; my friend, Georgia; and I were smart enough to start at the north end and work our way back to the south end, which brought us closer to home the fatter and more sluggish we got.

After three fried-and-stuffed food rolls — each — at our first stop, the Belgian restaurant Brabant, we were stuffed. While waiting for the croquettes to digest, we amused ourselves by flicking our way through the restaurant’s ViewMaster slides of old Belgium.

After we saw the last 3-D shot of Bruges, we happily rolled our way next door to Mazara Trattoria, a family restaurant that’s been at Juniper and 30th streets since 1984. We sat across from a floor-to-ceiling mural of Venice while trying not to spill any of the generous portions of red-sauced, baked mostaccioli on the pristine, white tablecloth.

Next up: dessert across the street at Daily Scoop, where we received child’s portions of various flavored ice creams. If we would have brought Osha, Chelsea’s German shepherd, she could have gotten DogScream — a yogurt, banana, peanut butter ice cream combo with a dog biscuit on top.

Time for coffee and butter-filled scones at Rebecca’s, a hot spot where they still do poetry readings à la ’60s. We still hadn’t made it past Fern and 30th, so we decided to box our butter-filled scones and munch on them later. Besides, we knew the next spot was Café Madeleine’s, a specialty crêpe spot. Alas, instead of the expected crêpe tasting, they handed us each one cookie that looked as though it had come out of a package from Vons. C’est là vie, I suppose.

The Rose Wine Bar and Bottle Shop in the historic 30th and Fern Mall (we still weren’t going anywhere fast …) proffered unlikely but delicious empanadas. One of the co-owners told us about their third-Monday-of-the-month, four-course dinners with wine pairings and their second-Monday-of-the-month Rose Wine Club release dinner, which our little trio thought sounded interesting.

Now, crunched for time (the event ran from noon until 4), we skipped Station Tavern and Sombrero Mexican Food, heading straight for Eclipse Chocolate. After all, there’s always more room for dessert — right? A chocolate and pumpkin bread pudding on the patio proved delicious. Plus, they handed us a chunk of chocolate on our way out the door to Captain Kirk’s (a kiosk across from the soon-to-be Target), where they were handing out fresh fruit bowls with granola.

Feeling as big as Big Kitchen (but visiting there anyway, since we just had to see the restaurant where Whoopi Goldberg once worked), we opted to place their large brownie squares in the bag with the scones for later, but did take some of our precious time to peek out the back door to see their quaint, outdoor seating area with picnic tables.

Next up: South Park Abbey, a sports bar that whipped up mashed potatoes served with a tender beef topped by the chef’s special demi-glaze. After that, I sort of hit the food wall. Placere Mio had too long of a wait, anyway. Hamilton’s Tavern looked dark and foreboding. But an acquaintance of Chelsea’s worked at South Park Brewing; so, as full as we were, we stopped in. I’m more a red wine kind of person than a craft beer kind of person, but I needn’t have worried, because they were serving ahi cups from their fresh fish market instead of craft beers.

It was several minutes after 4 when we landed at Grant’s Marketplace. But co-owner Joe Grant graciously served us one of their distinctive sandwiches on the patio and stopped by our table to chat. The market has general and specialty groceries. There is a fair trade, certified organic and espresso bar and free Wi-Fi. And if you love organically grown produce, you can sign up to receive a box of Suzie’s Farms locally grown veggies and fruits.

We were too late to participate in the Sacred Juice and Buona Forchetta tastings, but by 5 o’clock we were home and ready for 6 o’clock dinner — not!