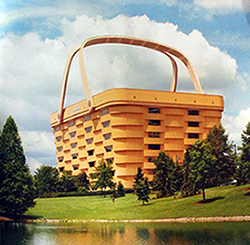 In the midst of a green lawn with trees and a lake idyllic for picnicking sits a basket: 192 feet long by 126 feet wide. Inside the basket is a seven-story atrium, 142-seat auditorium and office space for 500 employees. Talk about branding: This is the headquarters of the Longaberger basket company in Newark, Ohio.

Completed in 1997, this building that looks like the iconic wooden picnic basket was designed by the NBBJ architectural firm in Seattle. It is one of 100 boundary-pushing buildings covered in John Zukowsky’s Why on Earth Would Anyone Build That: Modern Architecture Explained (Prestel, 2015).

The book is divided into five sections: Triumph of Geometry, Space Age, Making a Statement, Skyscraper Style and Homage to the Past. Zukowsky rounded up the “usual suspects,” such as Ludwig Mies van der Rohe, Eero Saarinen, César Pelli, Frank Gehry, I.M. Pei, Rem Koolhaas, Antoine Predock, Renzo Piano, Frank Lloyd Wright, Friedensreich Hundertwasser and Louis Kahn (though not the Kahn masterpiece Salk Institute in La Jolla). But he also examines the work of architects whose names are less well known among the mainstream public.

Each of the 100 structures featured gets a two-page spread that includes a background write-up focusing on the designer and a brief paragraph on why the building is an important work of architecture. A useful bonus is mention of one to three buildings of similar design that may or may not be by the same architect.  Those with an appreciation of trivia (possible cocktail party icebreakers?) may appreciate savory tidbits such as these:

The 1,380-foot, 61-elevator Jin Mao Tower in Shanghai contains the world’s longest laundry chute (the building includes a Hyatt hotel). Designed by Skidmore, Owings & Merrill and completed in 1999, the building has the same number of floors as its street address: 88.

Designed by the firm RMJM architectural firm and completed in 2011, the Capital Gate building in Abu Dhabi puts the Leaning Tower of Pisa to shame, with an 18-degree lean (versus LTP’s 3.9).

Although its center is open to the air, La Grande Arche de la Défense in Paris weighs as much as the Eiffel Tower 30 times over: a total of 300,000 tons over a footprint of almost 240,000 square feet. The heft comes in part from the Carrara marble that clads the steel and concrete structure designed by Johann Otto Von Spreckelsen and competed in 1989.

I can’t say that each write-up specifically answers the question posed by the book title, but I think the question apparently raised early on by Dave Longaberger may be more to the point: “They can put a man on the moon and bring his butt back, and … we can’t construct a building that looks like a basket?”

Footnote: Alas, a Google search on “Longaberger headquarters” turns up a newspaper report dated April 25, 2015, stating that the building had become a “financial headache” for Newark taxpayers. The HQ employee count was down to 68 at the end of 2014. Obviously, America is not going on enough picnics (or is relying too heavily of Igloos). To help Longaberger pay off its delinquent taxes to the city (and thus help our fellow taxpaying citizens), what do you say we all go out and buy a Dorothy-and-Toto-style carrier, make some tuna sandwiches and head to the park?