Out of the Inbox 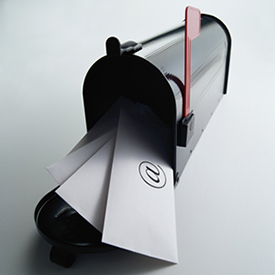 Utah ski resorts “boast big improvements” for the 2015-16 winter season. Five-time South African motorsport champion Gary Formato is endorsing a nanocoating for windshield protection. And L.A. artist Richard Clar is transmitting sound and image radio signals to the surface of the moon, with the bounce-back to be received at the Dingeloo Radio Observatory in the Netherlands.

I didn’t get this stuff from CNN, NPR or USA Today. Indeed, these nuggets of news gold plopped right into my email inbox.

As a member of the media, I receive a plethora of press release emails. The ones that come from local sources are often useful — or at least informative. But I have to wade through junk the same as I do with my personal email, which includes offers for all manner of things for which I have no use or interest (reverse mortgages, walk-in tubs, IRS forgiveness assistance, spy cameras, et al.). My work inbox fills with all manner of press releases that are not germane to topics covered by San Diego Home/Garden Lifestyles magazine.

To be honest, some could be derived as being relevant to the home — such as a press release on sponges “with a patent-pending infusion of 100% natural soap;” silicone scrubbers; “trailblazing” air purifiers; a “precision-milled,” bottle-opening key ring; and an all-in-one beach chair cart that also can be used to transport laundry (this latter item is not yet in the manufacturing phase).

I get lots of emails about music tours and video premieres and various events in and beyond San Diego.

I was intrigued that two of “10 reasons to go to California Beer Festival in San Dimas” included bikini bocce ball and Burt the Bear. I do like all those alliterative “b”s; but I have never heard of the apparently furry Burt, so meeting him doesn’t flip my switch.

I didn’t need “7 bonnes raisons” to visit Paris. But that’s what I got. Actually, the reasons were specifically for attending a décor event in Paris and didn’t include croissants, Champagne or the Eiffel Tower. Nor was there mention of bikinis and/or bocce ball. But there was “party until 11pm …” and Volkswagen shuttles between the city’s two banks (I’m pretty sure they weren’t talking about financial institutions, as I assume there are more than two in Paris).

I get plenty of invitations, such as one to see a new furniture collection in Milan and a “VIP” invitation to the release party for one L.A. magazine’s special issue. The latter not only required an RSVP for entry, but also a password at the door (sorry, I cannot breach the secret to which I was entrusted via hackable email).

Frequently, I receive invitations to visit booths at trade shows (such as the one I received this morning to stop by “stand B204” to see monogrammed door knobs at a décor show starting four days from now in London) and launches of interior furnishings collections at New York showrooms. And although there was no particular invitation, I was informed of the upcoming Roche Bobois/Jean Paul Gaultier exhibition in Munich.

One invitation, from Katarina, arrived in my inbox written entirely in Swedish. Although ancestors on my mother’s side of the family were Swedish, the best I could do at one time is utter a couple of words and count to 12 in their language. No matter now, I suppose, thanks to online translators. The email subject line read (translated), “We are waiting for your confirmation.”

After a friendly “Hej” salutation, the email said I was being presented with an opportunity to win a gift voucher to spend 10,000 kronas on a website that appears to be something of a Nordic version of Amazon. Katarina’s email warned that if I did not delta nu (join now), my potential good fortune would be given to someone else.

According to an online exchange-rate calculator, 10,000 kronas is worth $1,212 U.S. dollars. That’s not chump change, but I have a feeling that would just cover the shipping cost on what I might want from Sweden, so I hit the “delete” key and now Katarina’s invitation is sitting in my trash folder waiting to be sent to oblivion with 115 other trashed emails. It’s still retrievable should I change my mind …

Why Katarina’s email landed in my work inbox and not my personal inbox baffles me. Oh well, borta för alltid. Now my trash folder is ready to receive with a clear conscience once more.