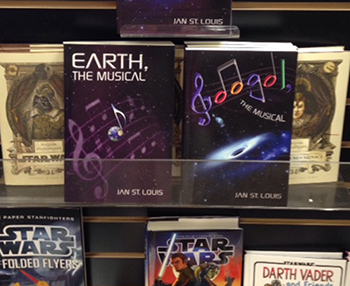 The pure whiteness of a “New Blank Document” challenges: “Let’s see what you got!” If this thrown-down gauntlet doesn’t intimidate an author even slightly, they probably aren’t trying hard enough. That’s why I think that, even if you can’t judge a book by its cover, you can glean quite a bit from its first sentence (acknowledgments and introductions excluded).

“At the moment when his head was spinning in time with the Earth through a vortex of more-than-galactic proportions — namely the black hole that had moments ago swallowed all the planets and stars of the Milky Way like the whale that swallowed Jonah, hopefully with as pleasant an outcome — Simon Derryberry recalled one particular hour in his life.”

That’s the first sentence in my second novel, Googol, the Musical. If it strikes you as lacking brevity, consider the first sentence of Charles Dickens’ A Tale of Two Cities. At 58 words, my premiere sentence lies well within accepted bounds. Not only did Dickens write 119 words before installing a period, but also had the nerve — at 85 words in! — to say, “in short.”

Because I am participating in a local author meet-and-greet hosted this coming Saturday (Aug. 15) by Mysterious Galaxy Bookstore in Kearny Mesa, I decided to see how the other participating authors could give Microsoft Word a run for its money.

“Drums tattooed on both sides of the scaffold as the sheriff tightened the noose around Goody Wildes’ throat.” (Pure Lies by Lynne Kennedy) Woo hoo, I think Goody Wildes and Simon Derryberry should meet and compare notes.

“Damn and double damn, Crusty Bucket was drunk again.” (The Glass Gargoyle: Book One in The Lost Ancients Series by Marie Andreas). OK, now I see a trio: Goody, Simon and Crusty. If they have nothing else to talk about, they at least can agree they were given great names.

“The imported silk frock hugged Rita’s curves a bit too tightly, but she would only make a token appearance at the trial anyway.” (Rules of Capture by Ona Russell).

“Five days tied to a dirty mattress in what probably was an abandoned crack house wasn’t ideal vacation time for Adelle.” (Siren’s Song [Wyrd Love: Book I] by Cynthia Diamond)

“It was a bad idea from the start.” (Every Day is Like Doomsday by Selena Jones)

By the time they caught up with him, he had forgotten to keep running.” (The Death Row Complex by Kristin Elise)

“What do you think the boys will blow up with their magic today?” (Ice Magic, Fire Magic by Shauna Roberts)

“The boy’s hands began to bleed as he ripped through the bushes into the darkened canyon.” (A Shadow Cast in Dust by Ben Johnson)

“The demon is crouched in the corner, between the Cheetos and the onion dip.” (Darkness Brutal by Rachel A. Marks)

If you’re sensing a “common thread” here — trouble, trouble right here in River City — then you can see a writing approach that Edward (“It was a dark and stormy night”) Bulwer-Lytton would appreciate.

“They say that on the eve of my birth, in the Time of Geese Flying, during the English year 1595, a white owl appeared in our tribal village of Werowocomoco.” (Favorite Daughter, Part One by Paula Margulies) If Werowocomoco reminds you of the shores of Gitche Gumee, give yourself a pat on the back; this book is indeed about Pocahontas.

“Exiting the cab at the corner of 50th and Lex., Beth Scott prepped herself for another stressful day at the office.” (The Secondary Target by Diane Lynn)

“Andrew and Tyler were outside on the patio enjoying the late November afternoon.” (The Fun House Mystery: Book One of The Andrew Teen Chronicles by R.D. Trimble)

“I deserve a Nobel Prize in biology and instead I’m writing a diary on toilet paper and hiding it in my bra.” (“Iden-Inshi” by Greg Stolze, the first story in the anthology Whispers From the Abyss, edited by Kat Rocha)

Some authors did, in fact, shoot for being concise:

“Not everyone believes in ghosts.” (Gilgoyle by Better Hero Army)

“Lilliane opened her eyes and found her world expanded.” (The Burned Bridges Protocol by Abigail Borders)

“The alarm clock went off the same time every day.” (Tales of the Unexpected by Ethan Howard)

“Do you even believe that the gods exist, Historian?” (The Last Bucelarii [Book 1]: Blade of the Destroyer by Andy Peloquin)

“Beaten, dragged, thrown down and kicked.” (The Last Entry: A Mystery by Teri MacIntosh)

“Tobin hated the silence.” (Sons of Chenia by Joshua Rutherford) Albeit not a record (Herman Melville’s “Call me Ishmael” comes to mind), Joshua’s mere four words win the prize for shortest sentence among the Aug. 15 participating authors. It’s worth pointing out, however, that he followed his opening salvo by producing an ambitious 585 pages.

If any of the above opening sentences intrigue you, then you owe it to yourself to visit Mysterious Galaxy on Saturday and meet their progenitors in person. I’ll be there under my nom de plume: Jan St. Louis.