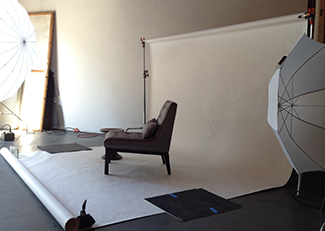 An explosion of white light assaults my corneas. I am momentarily blinded and must resort to blinking rapidly in a bid to regain my sight. As my vision is restored, I scan my surroundings in wonderment — yet again.

Seated upon a wheelie chair of cobalt blue, I glance to my left to take in the vintage rendering of Elvis Presley framed on the wall, a sole tear glistening in a lonesome path down his cheek as he is forever frozen mid-croon, created from oil paints on black velvet. It’s a prized possession of photographer David Harrison, the flash from whose camera had briefly bleached my world, hanging in his studio where I was witnessing my first commercial photo shoot.

This was act two in the production that was my inaugural outing from the offices of San Diego Home/Garden Lifestyles magazine. I had accompanied Associate Editor Nicole Boynton on her scouting trip (I like to think of it as a “mission”) to find items for her “Hot Finds, Cool Stuff” column and for an entertainment column. There before us stretched an afternoon of scouring local boutiques in search of all things stylish and unique, roaming the sun-drenched streets of San Diego’s Hillcrest and North Park neighborhoods.

Before I met up with Nicole, she had acquired items from Eugene Marley, owner of the French Garden Shoppe, in the form of two bulging boxes in the backseat of her car.

Our first stop together was the whimsically rustic and completely Parisian Maison en Provence. Owner Marielle Giai had gathered a lovely spread of items for us, all in crisp yellows and burnished reds.

From here we traveled to the Eden that is Green Fresh Florals, presided over by owner Carlos Franco, lead designer and floral-arrangement visionary. The store’s interior was filled with the fragrant aroma fresh-cut flora, shelves lined with plants displayed in all manners possible: in hanging glass terrariums, sprawling across decorative driftwood, within vintage birdcages, etc. It was a feast for the eyes. We were tempted to take his entire stock with us to the shoot, but limited ourselves to four items.

From there, we made our way to Pigment, a colorful store that reminded me of the random section of an Urban Outfitters. With such offerings as a DIY terrarium section (stocked with a multitude of glittering sands, colorful plants and glass containers), child-sized tipis and wall-hanging aquariums complete with rainbow-hued fish.

We bopped over to a local classic since 1985: Boomerang for Modern, a furniture store owned by David Skelley. Here we got an original 1950s chair in metallic silver, with a groovy end table shaped like a chess piece, along with a lamp that looks like it should have belonged to Neil Armstrong with its rocket-like shape.

At David’s studio, we lounged in front of an industrial fan as he set up his equipment. The heat and noise from construction of a restaurant out front entered the open garage-style door. He arranged a hefty roll of stock paper to drape over a table as a backdrop, then added stands with lighting at strategic intervals around it.

We arranged the items we brought upon the table, in patterns that Nicole had worked out the night before. As David snapped shot after shot, we adjusted items to create just the right look we were trying to attain. It was amazing how much one tiny adjustment or difference in shadowing could create vastly different photos. Also baffling was that a piece of strategically angled, black cardboard could cast a specific shadow that lent extra depth and color to the photos.

Equally interesting were some of the little tricks that David imparted to us during the shoot, from propping up certain items with small blocks of wood to increase their visibility to the mindset odd numbers of items grouped together look better than an even number of items.

The greatest surprise for me came when, at the shoot’s end, David informed us that every hour he spends behind the camera roughly means two at the computer perfecting the shots in Photoshop. As photography has moved firmly into the digital age, each photo must be artificially perfected to keep up with the times.

Nicole and I set off to return the borrowed items to the businesses, the end to an insightful look into the inner workings of the world of magazine publishing.