A Hub for Flowers 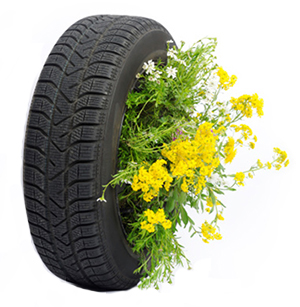 As I was making my way toward the Golden Hills Starbucks on 28th Street for the sugar/caffeine jolt in a small (OK, short) caramel-flavored machiatto, the sound of shoes tapping, hands clapping and castanets clacking made me look up from my task of finding potential trip hazards on the crumbling concrete sidewalk.

The hoopla emanated from the flamenco dance studio I was walking past. Its next-door neighbor was even more unlikely: a Rising Sun comic-book shop with a large, handwritten sign in the window advertising the store’s accounting services.

I discovered Omar’s Tire Shop (nearby on G Street) after I realized that repeatedly pumping air into my car’s leaky tire wasn’t the answer to fixing the tire’s gash. The shop’s building — painted an unlikely sky blue and accented with happy, yellow sunflowers — is earmarked on the store’s street front by hundreds of pinecones showcased on branches, twigs and rocks balanced atop each other in seemingly impossible acrobatic positions. The “art installation,” done by tire-shop owner Omar Ortiz, travels along the sidewalk, climbs up trees and makes its way around the street’s corner.

Sporting a straw hat and Birkenstock sandals, Omar was dancing with a broom behind the display when I met him. He told me that he’d been working on the piece for 2 1/2 years.

“Nature likes to be a part of my art,” he said. “People often bring me pinecones from trips they’ve taken. I add those pinecones in. Then when they drive by, it reminds them of their nice vacations.”

This in-progress work of art and the sunflower painting on the building go well with the other half of the tire shop: Chiquitas Flowers, owned by Ruth Carvajal.

“Some people might think that tires and flowers don’t go together,” Ruth said, “but I thought, ‘Why not?’”

Inside Chiquitas, a bloom-filled, claw-foot tub makes quite an impression in the middle of the space. Elsewhere, sporadic floral arrangements dot the shelves. While I was chatting with Ruth, Omar showed me one of his acrylic paintings depicting a water goddess.

“To me, water is life,” he said. “I never used to do art; but the more I do, the more I like it.” When he gets around to it, he added, he’s going to hang his art. I guess that means the tire/floral shop duo will become a tire/floral/art gallery trio.

On my way out of the store, I noticed an enormous, fluffy, white rabbit in a corner cage munching on a carrot and wondered where was the hookah-smoking caterpillar.