A Bit of Cloud Nine 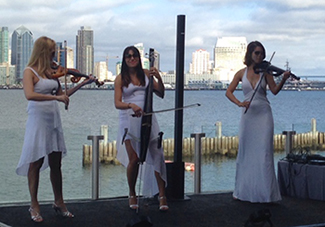 When you hand your car over to a valet, it’s slightly embarrassing to have to say, “Don’t pay any attention to the Service Engine light.” Thank heaven for the Electric Angels at the pre-opening party of Coasterra this week.

As much as I wish the Electric Angels were whizzes as mechanics (I’ve been in car hell all month), the female trio of string musicians at least made me forget about cylinder heads, distributors and intake manifolds for a while.

If you’re familiar with the pop and rock stylings of the Escala string quartet or crossover violinist David Garrett, you have a sense of the L.A.-based trio’s performance. I’m guessing that most of the people in the crowd did not know the group’s name (I asked the guy who was shooting video and was apparently “with the band”) or we could have enjoyed a collective laugh at the irony when the Electric Angels played Bruno Mars’s ”Locked Out of Heaven.”

Speaking of heaven, I was in the seventh one when the gals played what I consider one of the best songs of all time: “My Sharona.”

The uplifting of my spirits was aided by the following: the backdrop of the downtown San Diego skyline and Coronado Bridge; the fact that the Cohn Restaurant Group’s new restaurant (set to open in August) is a stunner with a vast patio; the servers walking around with trays of Chef Deborah Scott’s culinary masterpieces (my favorite was a scallop carpaccio on plaintain chip); and rows of Baja wines and tequilas to taste (in addition to bar service). The evening made for a wonderful mood lifter.