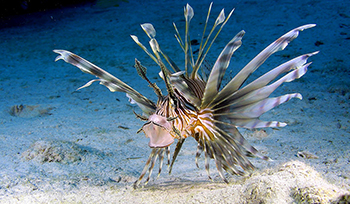 Although I practice yoga on pretty much a daily basis, meditation has escaped my grasp. I confess that I do not even give yoga poses the mindfulness the experts say it needs, but I figure even nonmindful (I won’t say “mindless”) yoga is better than no yoga. In any event, I believe I discovered the secret to meditation last night at the Reuben H. Fleet Science Center.

I was there for the Balboa Park debut of Jean-Michel Cousteau’s Secret Ocean. As I sat in the Heikoff Giant Dome Theater watching an array of colorful marine life dance like they were in an underwater remake of Fantasia, the serenity hit me like a ton of bricks (I know, an unlikely metaphor, but it makes the point).

I was especially mesmerized by the Christmas tree and feather duster worms that emerge from tubes they bore into coral. If only terrestrial earthworms could be as beautiful and graceful as their marine counterparts!

I’m not inclined to want to peer into the mouth of any living species (especially one threatening to have me for lunch), but I have to admit that looking into the cobalt cavity of a giant clam was nothing to make me turn my eyes away.

I also was surprised at how lovely crabs, shrimp and sea cucumbers can be. Indeed, one wonders if the filmmakers found their bathing beauties through an underwater casting call. They even managed to make a moray eel attractive. I’ve seen eels in aquariums and, well, let’s just say I’ve always thought they had a face that only a mother (an eel mother, that is) could love.

I could go on, perhaps about the red lionfish (shown above) with its striped torso and fluttery but lethal (venomous) dorsal fins, but you should see the film yourself.

Narrated by noted oceanographer Sylvia Earle, Secret Ocean is filled with fascinating facts, but I mostly became “immersed” in the scenery. That’s OK. I can return to experience the film again, which opens to the public on Friday (July 3).

Flat IMAX screens are nice, but there’s something about the 76-foot dome projection enveloping my vision that brings me as close to meditation as possible without having to “empty” my mind.

Cousteau and his crew captured the aquatic life around the islands of the Bahamas, Fiji and Catalina. According to Richard Murphy, chief scientific advisor for Secret Ocean on hand for the debut screening, the scenes were filmed no deeper than around 40 feet. It’s amazing to ponder the bounty of life so close to us that we don’t see — without filmmakers like Cousteau.

But there’s a time to ponder, a time to wonder and a time to just let go and allow your mind to drift away.