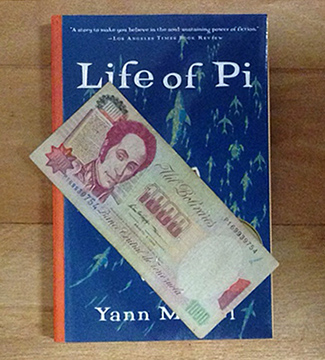 Flipping through the pages of Life of Pi in a local bookstore that sells used books, my eyes landed not on a particularly erudite section of prose (which is not to discount the potential of erudite prose in the novel), but rather on a nicely pressed sheet of paper currency — 1,000 smackeroos, to be exact!

Actually, to be exact, I should distinguish “smackeroos” from “dollars” for those who are unaware that the United States Mint has not printed $1,000 notes since 1934 and the Federal Reserve began taking higher-denomination bills out of circulation in 1969.

I did not recognize the high-foreheaded, long-sideburned gentleman whose visage graced the Mil Bolívares, but I could assume he was an important individual because he sports a stiff and embellished collar that covers his entire neck. Behind his head is an open book. Could he have been a famous Venezuelan author? How apropos that would have been, given my finding the currency in a book.

While I had no reason to suspect that 1,000 bolívares would make me rich, I have to admit that all those zeroes sent a chill up my spine.

Granted, logic would tell you that if a 1,000 Venezuelan bolívares note had much value, chances are it would not be used as a bookmark. On the other hand, even 1,000 U.S. dollars is chump change to a millionaire. And an eccentric one (millionaire, that is) might very well use legal tender (at least of the paper variety) to mark his or her place in a novel, especially if he or she was interrupted from reading when someone brought in a stack of money to be counted. (One should occasionally count one’s money just to be sure it’s all there, I suppose the rationale could go.)

In any event, I left the used bookstore (to clarify, I mean a bookstore that sells used books, although the store itself is used, as indicated by the fact that I saw many customers there) with the thrill of being richer than I was when I got up in the morning, even though I had just spent a few bucks in the store.

When I got home, I did a quick online monetary conversion of bolívares to dollars. According to moneyconverter.com, the currency had a value of almost $159 George Washingtons. If it couldn’t be worth an amount with a comma in it, it would at least have been prophetic, given its Life of Pi residency, to find an exchange rate of $3.14.

Nevertheless, $159 in free dough was reason enough for a happy dance — until further investigation revealed a tragic truth: Since February, the value of Venezuelan bolívares plummeted faster than the Formula Rossa coaster in Abu Dhabi (incidentally, the world’s fastest roller coaster, reaching 149.1 mph, presumably on its downhill run). And that is on the black market. You can’t buy goods and services in Venezuela with the country’s official currency; you must have U.S. Federal Reserve notes. That means I can’t even travel to South America and get my 1,000 bolívares’ worth of bread.

After the priority of determining the worthiness (now worthlessness) of my discovery, I researched the identity of the individual pictured on the Mil Bolívares.’ His name is Simón Bolívar. He was instrumental in establishing as sovereign states Venezuela, Bolivia, Peru, Colombia and Ecuador and served as president of the first four. The “book” behind his head on the bank note is apparently the Venezuelan Declaration of Independence and not a novel. The flip side of the bill shows a crowd of people at the declaration signing.

Just to be certain I was correctly informed by The Internet of Everything, I called Wells Fargo’s foreign currency exchange department.

“That’s a currency we don’t trade,” the WF representative said. When I asked if she knew of an entity that might do so, she replied that she was unaware of anyone in the United States that would, as “there are restrictions on the import and export of that currency.”

There was another route I could pursue. Perhaps there are collectors of foreign currency who would appreciate my Mil Bolívares. But I found two eBay listings offering identical notes (also 1998) for $2.25 and $2.29.

I decided to hang on to my cash for its apparent value as a bookmark.

I further decided to revisit the bookstore. Who knows what else people are using to mark their place in the pages of a paperback?

Addendum: If you want to buy or sell used books, CDs, comics, DVDs or even electronics, visit BookOff in Kearny Mesa. The Torrance-based company is operated by individuals of Japanese heritage; in addition to English-language items, the store carries Japanese-language items and features a section devoted to manga.