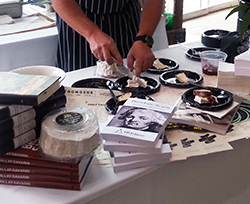 I arrived ready to nibble at the annual Eat.Drink.Read. A Culinary Event for Literacy. As an editor, it’s always meaningful when the written word is celebrated; and when food is added to the mix, it makes for a fantastic evening. Hosted by the San Diego Council on Literacy, this event is like a book club for foodies, with more than 15 of San Diego’s renowned chefs gathering to serve a dish inspired by their favorite book. Winemakers and craft breweries pair libations to match the dishes.

Executive Chef Michael Mora of Underbelly didn’t seem to notice me watching in wonder as he intently sliced and diced spicy tuna and salmon to perfection, then compressed and molded it into sushi with Zen-like precision. When he was finally satisfied with his craft, he handed me a tasting plate with a bite-sized, multi-layered piece of fish cake drizzled with wasabi sauce inspired by the nonfiction book Five Against the Sea by Ron Arias.

“I wanted to showcase the sushi that I make,” Michael said, “so I chose a book about five people who are adrift at sea for three months, whose only way to survive is to eat fresh fish.” After tasting the delectable delight, I made a mental note to add this true story to my reading list, thinking that if castaways dine this well, life at sea might not be too rough.

Traditional English food gets a bad rap, but Executive Chef Steven Riemer of Oceana Coastal Kitchen at the Catamaran Resort Hotel set out to prove everyone wrong by choosing the historical novel Wolf Hall. “I love the book’s intrigue. It is set in the 1530s in England when they just had sheep and pies and pastries. There were no New World ingredients back then like tomatoes, beans or corn; but they did have oranges from China, so I made a raviolo of lamb with oranges, which resembles a little pastry with meat inside,” he explained.

As I made the rounds to more than 30 serving stations, I noticed common themes. In years past, Urban Solace chose books that celebrate food; this year, they went with the 1932 Pulitzer-prize novel The Good Earth about famine and hardship in a Chinese village, serving a congee rice porridge that is a staple in China. “It is considered a ‘poor dish,’ with a creamy rice base, smoked jidori chicken, ginger, onion and garnishes,” Chef Matt Gordon explained. Despite its humble roots, it was my favorite dish of the night — very hearty, nourishing and flavorful.

Not to be outdone in this genre, Croce’s Park West Executive Chef Russell Rummer chose the Depression-era novel Grapes of Wrath. “It’s one of my favorite books; the struggles they endure remind me not to take for granted all the food that is handpicked by migrant workers,” he said. One scene in particular, where the characters sit around an open fire roasting a freshly hunted rabbit, inspired his duck rillettes crostini with agave mustard, red wine onion marmalade and micro arugula.

Other chefs took a more lighthearted approach in the spirit of springtime. Chef Donald Lockhart with Cusp Dining & Drinks never bores of Alice’s Adventures in Wonderland. Every year, his station is decorated like a Mad Hatter tea party. “I love this book because it is so whimsical and there is so much food in it. I love the idea of getting lost in your life,” he explained. He dished out yellowtail with roasted quinoa, cucumber and a curry cream sauce, inspired by the “fish-footmen” who deliver invitations to the Queen’s party. “It feels like spring when you eat it, it’s so fresh and light,” he said.

Brian Malarkey brought the event together by opening up one of his restaurants, Green Acre Campus Pointe in La Jolla. He also hosted a VIP event prior to the main event that included a reception to raise funds and literacy awareness.