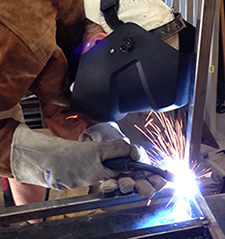 England gained a new princess, a horse with a misspelled name won the Kentucky Derby and the Mayweather-Pacquiao fight is finally history. It was an especially momentous weekend for Kate, William, Ahmed, Bob, Victor, Floyd and Manny — plus anyone who had money riding on any or all of the aforementioned wagering opportunities. As for me, my mind was on metal.

In the morning, I pulled dried palm fronds from the rebar frame that protects my outdoor bar from wind and sun. The fronds (which came from twin palms in my front yard) worked well for years. But some were turning black, and the whole thing looked like a fire hazard. Even looking at the homemade shelter laid bare, I had to admire the work my friend and I had done on the curved wall/roof and the bar itself.

We made the bar and stools from rebar that we wrapped by getting the metal red hot with a torch (talk about a hot July day in Palm Springs!). On a post near the bar is a sign: “RE” over “BAR” (the letters also are made with rebar and painted with orange fluorescent Rust-Oleum to suggest neon) and under the letters is a circle with a tile mosaic showing a torch rosebud. (The top of the bar and stools also are tile mosaic.)

We wrapped rebar so tightly around other rebar that the bar and stools are solid without welds. However, welding is prevalent everywhere else in the yard: in a bench, sculptures and gates. The front patio gate we made by making a frame with steel pipe and then filling it in with whatever we found in the garage, e.g., old circular-saw blades, padlocks with the keys in them, chain, expanded metal and rebar.

My first welding project was a bookend: a stick figure pressing against a steel plate “wall” to keep books upright. That success inspired me to tackle the life-sized version that “holds up” a block wall in my back yard. I gave this one muscles with anchors carved out of them and named the sculpture Popeye.

My friend and I have made many outdoor sculptures together, but this past Saturday were worked on a totally functional, interior piece: a vessel-sink stand for the hallway bathroom. It’s a duplicate of one we made for the master bathroom. The bathrooms are small, so the sink stands need to be open and simple, with nothing more than towel bars. I got the inspiration for the design in a store that specialized in bathroom design.

What sparked my enthusiasm for making a sink stand for the hallway bathroom was seeing a leftover piece of granite sitting outside a business near my friend’s place. It’s mostly green with blue crystal inclusions. The business owners say the granite belongs to a customer; but it’s still sitting there more than a month later, so my hopes are rising that one day it will be mine. What’s that saying? “Desire is nine-tenths of possession”?

So there I was on Saturday wearing welding leathers cape sleeves, a helmet and gloves. We had previously cut the lengths of square steel tubing, so we were able to assemble them all in the afternoon.

I’ve long been drawn to metal. I even consider base metals “noble.” I like the way metal can look sleek or “tortured” into a form that seems impossible for such a hard material. I like the challenges that metal presents when you work with it and the speed with which it solidifies after being melted. And I like its endurance.

Back in San Diego on Sunday evening, I knocked over a hand-shaped stand (made of some cheap composite material) that I bought to display an antique, bronze geisha mirror. One of the fingers broke off, and I knew it could not be glued back together because I had tried to glue together the first stand I’d broken. Instead of buying a third hand stand, I decided I’ll make my own — out of metal.