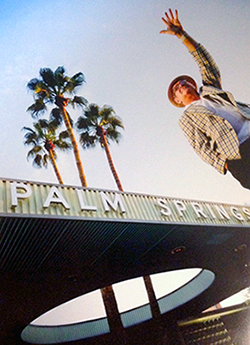 I received a book this week that lovers of modernist architecture should have on their shelves. Palm Springs Modern Living (Gibbs Smith, 2015) is a project by photographer James Schnepf that goes beyond most architectural books because it shines a light on the people living in a modernist environment.

James explains his approach in the preface, noting that his curiosity was piqued after he purchased a 1959 William Krisel-designed house and began exploring the desert landscape during visits from his Midwest base: “As primarily a people photographer, I naturally began to question, ‘Who lives in that house?’”

The answers come directly from the people featured. Most talk not only about the lure of the architecture, but also the lure of the desert. Although I think that one has to experience it to fully grasp it, the comments express the qualities of the environment that appeal to their individual sensibilities.

I received the book from my friends Karen and Tony Barone, who are among the people showcased in their homes. Like James, I believe that it’s people that bring life to structures, figuratively as well as literally speaking.

Architects featured in the book include Albert Frey, Donald Wexler, E. Stewart Williams, William Cody, Hugh Kaptor, John Lautner, Rudolph Schindler, Richard Neutra, A. Quincy Jones and Krisel, who says in the book, “Midcentury Modern architecture is always valid, as it is not a ‘style’ but a language that is constantly adjusting to the changes affecting design and lifestyles without compromising its basic principles.”

There are terrific architectural and interior design shots, but my favorite images in the book are the ones that include people. The first thing you notice is that most of them are dressed in bright colors and lots of prints. Many of them lounge poolside. One couple appear to be sunbathing, but he sports a green suit, striped shirt, shoes and hat; she wears a long-sleeved print dress and silver, high-heeled, platform shoes. Another couple stand in their swimming pool fully clothed and with martinis in hand. Yet another couple, also fully clothed, float face up in their pool.

Some of the photos strike me as Bretonesque, making me think they should be in a museum exhibition. There’s one of 19 ladies in pink and white spread out among the tees of a putting green at Marrakesh Country Club. There’s one with an architect and builder standing behind a white block wall, mountain and palm trees in the background and only their heads visible (actually 3/4 of a head in the case of the shorter man). Karen wears a dress of gold lacework over gold lamé, standing before a block wall fronted by a plate of metal with large, oval cutouts. James shows his skillful eye especially in the photo shown above of Palm Springs Modern Tours founder Robert Imber in front of Palm Springs City Hall.

In his write-up, Robert notes that growing up he had an “architecture museum” in his basement “curated and visited by myself.” Philosophically speaking, he says, “Modernism in architecture certainly rises to the level of ‘art,’ regardless of one’s subjective judgment. Simply observe the visceral as well as intellectual response to its forms and buildings.”

And Peter Moruzzi, founder of the Palm Springs Modern Committee, makes the point that I think sums up the love of modernism: “Great architecture always transcends arbitrary generational boundaries.”