A Contest of Will 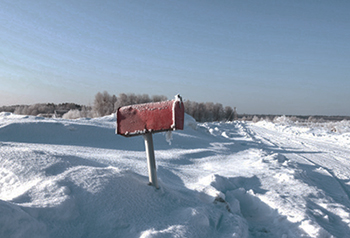 The postal tribute, chiseled in stone at the New York City post office and the Smithsonian’s Postal Museum, states, “Neither rain, nor sleet, nor gloom of night stays these couriers from the swift completion of their appointed rounds.”

Designer Leslie Cohen may not be a mail carrier, but she recently took that tribute to the outer limits. Neither snow, nor ice nor power outages stayed her from entering one of her projects in our 24th Annual Kitchens of the Year contest.

Although Leslie still works with San Diego clients, she lives in North Carolina now. And although that area isn’t known for its harsh winters, this year was an anomaly. Regardless of the weather, she was determined to get her Coronado project to us.

“I am trying to submit an entry,” she said in her e-mail to me. “It's packed and ready to go, but we have severe weather issues here. No power, tons of snow, downed trees blocking roads, haven't had trash service in two weeks, and most businesses are closed. It appears we won't have FedEx available until next week. I'd send you the entire package electronically, but I don’t have power for my main computer, and the entry isn’t on my laptop.”

She said that the snow was going to melt just enough to turn into ice and that the temperatures would keep them in ice for several days. She wondered if there was any possibility that we would accept the entry a little late.

“I’d just like the chance to enter,” she wrote.

I told her that as long as the entry arrived before the judges did, her project would be accepted. The next day, I received another e-mail from Leslie: “So, I braved the roads yesterday after discovering that the main FedEx facility was open and accepting outbound packages (nothing inbound arriving).”

FedEx wasn’t even sure anything would actually leave the facility, but Leslie wanted her package on the road.

“I got quite creative by finding the news stations’ video camera feeds so I could look and see where power was out,” her e-mail went on. “Where there was power, I could see road conditions. So I mapped out my voyage to FedEx and it worked out just fine.”

Her next e-mail was jubilant: “I just checked tracking and my KOY entry has made it to Memphis, TN, so far. Yea!”

Her entry did arrive at our offices  safely and in time for judges Linda Medina, Ame Parsley and Paul Schatz to proclaim the space a winner. You’ll see why when you look at our 2015 Kitchens of the Year coverage in the June issue.

(I’m sure home gardeners and landscape designers will be as eager to enter our Gardens of the Year contest. Details and an entry form are on this website under the “Contests” tab on the navigation bar. The deadline is May 4.)