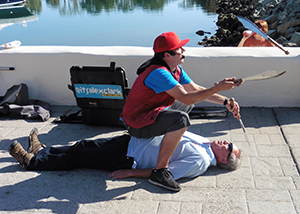 After several hours of fresh air and sunshine, my friend and I were ready to make our way to dinner. We walked by a young man standing on a suitcase, imploring passersby to stop and watch him. I turned back and said, “I’ll watch.” I know what you’re thinking: Creepy. Right?

Well, I suppose if you consider a guy juggling daggers over a stranger’s face as he sits on his chest creepy …

OK, let’s back up before you get the wrong impression. Last weekend, Seaport Village hosted a busker festival. The buskers (more commonly called street performers) included suitcase-standing, dagger-juggling Alex Clark. Like the other acts performing at various spots around Seaport Village, Alex first had to gather an impromptu audience among passersby and lastly convince those who stayed to watch that they should pay him for the entertainment.

While all the buskers I saw (I caught six acts) said they enjoyed street performing, I think it must be a difficult way to make money.

You need to be able to spontaneously work in an environment that is essentially out of your control.

If your act relies on comedy, as it did with the buskers at Seaport Village, you need to be quick witted.

You need to be a people person so that you can (1) make fun of people in an amiable way and (2) convince them to become part of your act. In particular, you need to be good with kids, because they make good “volunteers.”

You need to be able to transport your props easily (such as in a suitcase).

Most importantly, you need talents and/or skills that translate to street performing. Unicycle and other balancing tricks, sleight of hand, miming and juggling were popular feats at the busker festival. A demonstration of skill with an element of danger was another common thread: juggling with lit torches or knives or juggling mismatched items (i.e., a knife, a toilet plunger and a rubber chicken) while balancing on a tall unicycle.

Probably the most dangerous act was that of Derek McAlister, who performed acrobatics on a 20-foot Chinese pole. The Texan pulled four men from the crowd to hold tethers that would, hopefully, keep the pole at a 90-degree angle to the ground. Derek not only had to have all the above attributes (plus acrobatic skill), but also had to be good at quickly sizing up people (to ensure four solid “anchors”) and had to be a trusting soul (since his safety relied on the strength and commitment of his unfamiliar/inexperienced assistants). Among 10 acts, Derek won the festival’s People’s Choice Award, which earned him a $500 airline voucher.

The festival is an annual event at Seaport Village, so mark your calendar for next March. Until then, should you come across a street performer, don’t just walk by as if they were invisible. Show them some respect by stopping to watch or listen. If you’re entertained at all, drop a little money in their hat, box, guitar case, whatever. If you hesitate to shell out any dough when you were just out for a walk or were on your way somewhere, consider how much you pay for cable TV or movie tickets where spontaneity is an illusion.

Below are photos of Alex Clark, Nerdy Noah and Chris Hutcherson with his noncompeting “Bronze Baseball Statue” act. 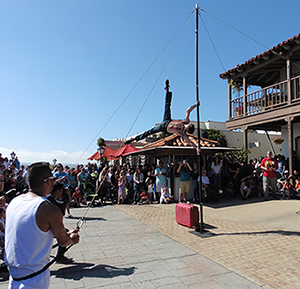 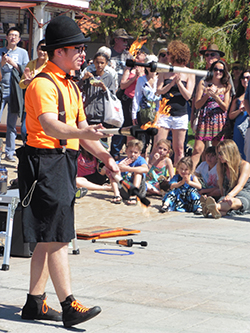 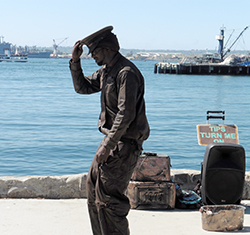