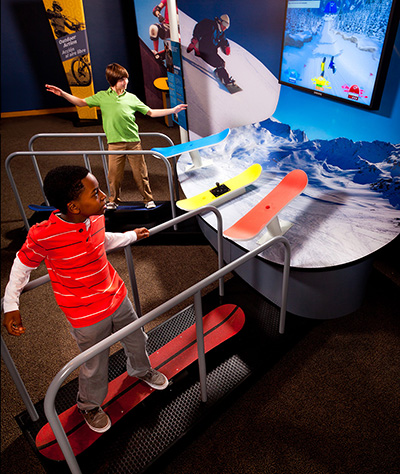 As a kid in the early 1960s, my favorite museum to visit was the National Museum of Natural Sciences in Ottawa.

Second, almost every diorama had a button I could push. I could make grizzly bears growl and mountain lions roar in the mammal gallery, or I could hear the difference between a loon’s plaintive call and a Canadian goose’s loud honk in the bird exhibit.

It was unfortunate that the admission price precluded me from visiting as often as I would have liked, though. Too bad they didn’t have a museum month where you could get a half-off pass like they do here in San Diego.

For more than a quarter of a century, the San Diego Museum Council and Macy’s have made it a little easier to visit museums on a budget in February. All you have to do is pick up a pass at any Macy’s store and you’ll get half-price admission to more than 40 participating museums.

I know where I’m going first: San Diego Air & Space Museum. I’ll be able to ride a snowboard in a 3-D experience (as shown in the photo above), design my own video game, operate a robot, compete in a mountain bike challenge, save a cat and do a whole lot more than just push buttons at 2theXtreme – MathAlive!

After that, I’m going to discover King Tut at the Natural History Museum. I figure if I visit four museums every weekend in February, then one every weekday, I’ll have visited … um, not as many museums as are participating (and maybe I should visit that math exhibit twice).

For a map of museum locations and a list of additional Museum Month activities, visit sandiegomuseumcouncil.org.