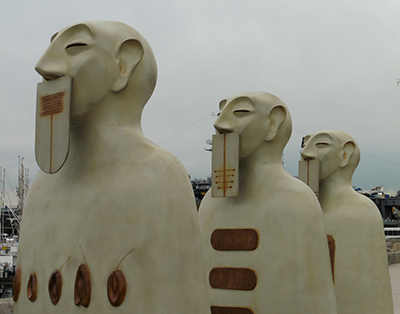 The mere logistics of moving 10 tons of bronze from one country to another to another would sufficiently impress me. But even more compelling was hearing from the Mexican artist who created the 10 monumental sculptures recently installed at Ruoco Park on the waterfront just north of Seaport Village.

Rivelino attended the Jan. 29 unveiling of the collective work titled Nuestros Silencios and, through an interpreter, explained the message he hoped to convey by the faces with shielded mouths.

“Millions of text messages go out throughout the whole world in every possible language,” he said. “But what’s almost impossible to believe and to accept is that the most important things we are still keeping silent about. … We think that freedom of expression, of speaking out, is a matter of the masses; but it really starts with self-censorship.”

Rivelino did add this important point in his talk: “Freedom of expression does not mean freedom of aggression.”

Completed in 2009, Nuestros Silencios has traveled a noteworthy route through Europe and Russia: from Lisbon to Madrid to Brussels to Berlin to Rome to London to Rotterdam to Moscow to St. Petersburg. It then went to Mexico City. San Diego marks the beginning of its U.S. tour.

In each location, the installation has been adapted to its site, whether in a park, along an esplanade or in the center of a plaza. Sometimes the 11.5-foot torsos have been placed in a straight line, sometimes staggered and sometimes in a circle. The distances between have changed. They have all faced the same direction, opposing directions or each other. In San Diego, they are turned at a slight angle, five facing northwest and five facing southwest. See below for images from the Lisbon and London sites.

In addition to the 10 pieces, the installation includes a 6.5-foot cube specifically made for, but not limited to use by, people with impaired vision. The cube, embossed with braille, contains openings through which people can reach to feel models of the sculptures. A bus from the local Braille Institute brought a group to the unveiling.

Attesting to the significance of the event, the ceremony included the Consul General of Mexico in San Diego, Remedio Gómez Arnau; Mayor Kevin Faulconer; Chairman of the Board of Port Commissioners, Dan Malcolm; Director of the Mexico Tourism Board in San Diego, Alejandro Santander; and the press attaché from the Consulate General, Martha Varela.

The cost of bringing the artwork to San Diego was borne by the Mexican Ministry of Foreign Affairs and Consulate General, with support from the Unified Port of San Diego.

Nuestros Silencios will be on display until March 15, after which time it will make its second U.S. appearance in Los Angeles. 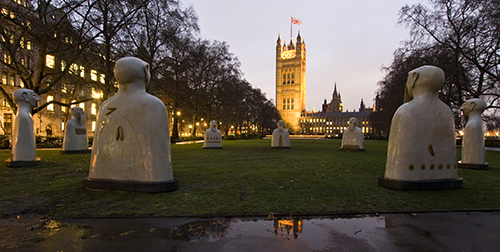