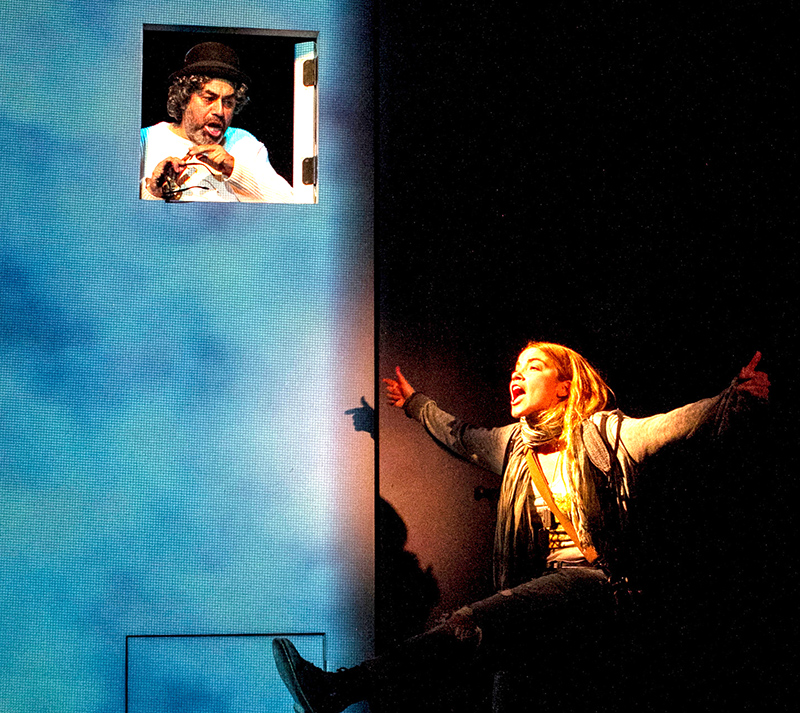 Anyone who knows the difference between “Yippie” and “Yippee” should beat a path down the Horton Plaza stairs to the Lyceum Theatre. Those who don’t know the late 1960s/early ’70s history of the Youth International Party could learn a thing or two at the San Diego Rep’s production of Steal Heaven, but the finer points of the script and staging are undoubtedly aimed at the baby boom generation.

This comedy with a message (my favorite form of comedy and my favorite way to be presented with a message) was written by Herbert Siguenza, which makes sense because he is a co-founder of Culture Clash, whose works center on political and social satire.

The gist of the play is that a young activist named Trish arrives at the pearly gates to be greeted not by St. Peter, but rather Yippies co-founder Abbie Hoffman (played by Siguenza). Hoffman is looking to recruit newly arrived activists to train and return to Earth to effect real change and considers Trish a prime candidate — until, deep into the training, he learns something about her that leads to a catharsis for them both.

Aside from the acting challenges for Summer Spiro as Trish (early in the show she has to act out her entire life in one quick swoop, midshow has to convey a trip on LSD and near the end has to perform an intricate rap song), the role is physically demanding. While exuding her character’s passionate energy, performing battle moves in boot-camp training and a war-scene re-enactment, and dancing (including the Russian Cossack squat), Spiro covers every square inch of the stage.

The funniest moments come whenever the play’s third actor, Mark Pinter, enters the scene — as God-as-George-Burns, Albert Einstein, Indian guru Rajneesh, Steve Jobs introducing the iRebel, Julia Childs carrying a tray of “boof” bourguignon, John Lennon and Ronald Reagan. Pinter nailed them all. But I laughed hardest when, as Childs, he dropped the “boof” on the floor and put it back on the tray.

Actually, I would say the play has two more “characters”: the ’60s-’70s music and the staging, which was cleverly handled. God-as-George-Burns entered from a foldout platform high on the backdrop wall. John Lennon descended a flight of stairs from a door at the top of another wall. Projections ranged from a classic television screen to moving, psychedelic images depicting the experience of an LSD trip (or my trip through the Horton Plaza parking garage).