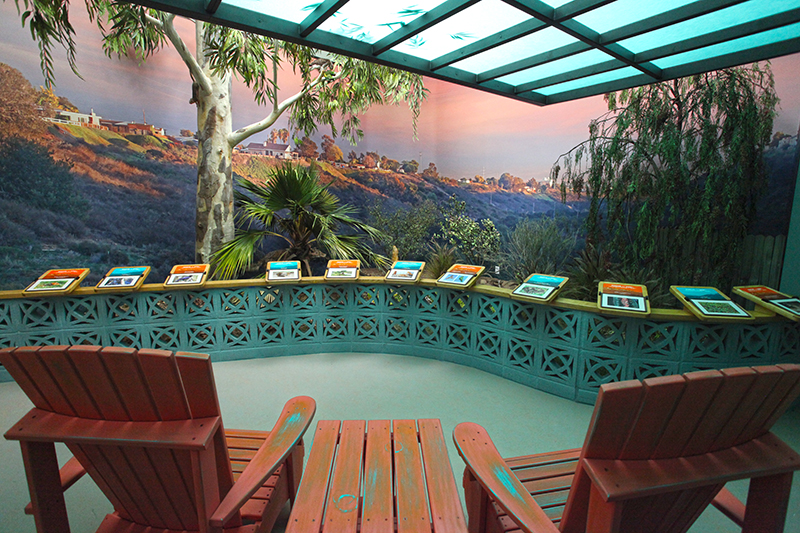 You probably can think of something from your childhood that would fit into a museum exhibition: perhaps a beloved toy. Michael Field thinks bigger. San Diego Natural History Museum’s lead exhibit designer replicated the patio of the Mid-century Modern home he grew up in — the kind he says were built on mesas throughout Southern California (his was in Clairemont).

Part of the museum’s new permanent exhibition, Coast to Cactus in Southern California (opening Jan. 17), the faux patio was built to focus on the canyon scenery.

The exhibition patio’s view is an image that landscape photographer Bill Evarts of Escondido took of Tecolote Canyon Natural Park. An aerial map shows the Tecolote neighborhood where Eloise Battle (appropriately, given her surname) led residents in an effort against development to protect the area’s ecosystem. Visitors to the exhibition will be able to hear her talk about the grassroots campaign in recordings.

In the familiarity of a Southern California patio setting, the museum sheds light on the impact of introduced species on native flora and fauna in our local canyons. And by “introduced species,” that means more than humans.

“We have a guessing game [in the exhibition]: Native or not?” Michael says. “We interviewed people outside the museum. Sixty-five percent thought eucalyptus trees are native to California; eucalyptus is from Australia. Eighty-five percent said California pepper is native; it’s from Peru.”

As for the concrete block and Fiberglass roof panels on the patio, it’s fair to claim they’re “native,” because they are from Southern California manufacturers who have been making those icons of Mid-century Modern design since at least the midcentury. According to Michael, both were surprised to be getting orders for items they hadn’t sold for years. In fact, the roofing panels had been sitting in a warehouse for so long that museum staff had to sand and refinish them before installing them in the exhibition.

The Adirondack chairs on the patio are a “Southern California version,” Michael says, of Popular Mechanics’ plans.

Other areas of the new exhibition showcase Arts & Crafts design, including a loveseat custom made by Bryan Murphy, an Escondido woodworker specializing in that style.

“I wanted [the exhibition] to look and feel like San Diego,” Michael says. “There are great moments in design where things became ‘Californianized.’” In a section with a Torrey Pines diorama, “the intent was it would look like the 1920s Del Mar home of a native-plant enthusiast.”

California mission tile used in flooring inspired the colors used in the exhibition displays, notes Michael, who worked with Zagrodnik + Thomas Architects on creating the shell of the exhibition.

“This part of the building was built during the Depression, so they never finished it,” Michael says. “It was boarded up to be finished later, and later is now.”

“We started planning [the Coast to Cactus exhibition] in 1998 when we planned the addition,” says Mick Hager, the museum’s president and CEO. “We had always planned that on one side of the atrium we should have an exhibition on the geological and paleontological past of San Diego and on the other side talk about our biological present and the wonderful diversity that we have in our region. We are one of 35 biodiversity hot spots in the world. We have a very high number of species, and many of them are endangered.”

That “past” area encompasses the museum’s last new permanent exhibition: Fossil Mysteries, which opened in 2006 in the building addition. Coast to Cactus takes over 8,000 square feet on the second level that have been used for temporary/traveling exhibitions.

“It really fills a need for schoolchildren and parents and anybody who wants to understand why this area we live in is unique,” Mick says.