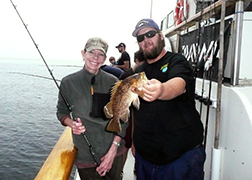 “Here, I’ll hold him closer to the camera so he looks bigger,” Capt. Tiny said of the kelp bass he had just removed from my hook. It was my second catch of the morning on my inaugural ocean-fishing experience.

My goal was to catch Easter dinner. And, as a pescetarian, that meant I was not going hunting for a Honeybaked pig — though I did sport a camouflage cap.

Thirty-seven passengers boarded the Chubasco II sport-fishing boat on April 20. Once we were underway, crewmember Chad demonstrated the proper way to bait a hook with squid, mackerel and anchovies. I will admit that I assumed the “eww” look when I watched him pierce the nose of an anchovy and thread the squirming thing onto a hook. I decided to bait my line with a lifeless slice of squid.

Chad also demonstrated how to smoothly let out a fishing line. It seemed straightforward, but my early attempts to lower my bait through the water were much less fluid, and I did tangle my line a couple of times. Fortunately, hosts Chad, Kevin and Tiny were generous with their boatload of novice anglers.

The squid yielded a catch early on, but other people were having success with live bait. So I went over to the anchovy bins and slid my hand among the slippery swimmers. It took a little practice to corral lively specimens and wrangle them into my clutches. Because the little buggers don’t swim in unison, they often ended up in my grasp backwards — that is, with the head I needed between my index finger and thumb facing the less dexterous part of my hand.

One of the bigger, feistier anchovies literally slipped through my fingers and landed on the top of the transom, where he conveniently found a short pipe to duck into. There were plenty of anchovies in the bin, but I was not about to let my bait be “the fish that got away.” So I plucked him out by the tail with a “Ha!” intended to convey the message that I had outwitted him.

In time, I got fairly proficient with baiting and reeling and was pleased to have acquired a new skill. (Expert fishermen probably would not be so quick to apply the word “skill” to my process, but I’m good with it.)

In the end, I caught three (hence former) denizens of the sea and learned these additional lessons: (1) Do not stand in the stern of the boat when a crewmember slings an entourage of anchovies into the water to attract bigger fish. (2) Ocean water is apparently too dense for its inhabitants to be lured by the siren call “Here fishy, fishy.”

On the way back to Mission Bay, Chad and Kevin filleted our bounty, discarding the remaining carcasses into the ocean. This whipped into a frenzy the local bird population, whose boldness could have sent anyone with a fear borne from watching a certain Hitchcock film below deck.

Back home, I pulled the fillets out of the plastic bag and felt a real sense of accomplishment for the day, as well as a renewed appreciation for the virtue of patience. 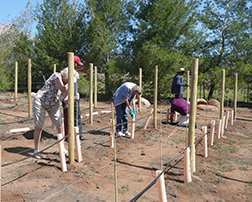 I acquired another new skill over the weekend when I helped plant a vineyard in Jamul. Greg Maness, owner and CEO of Maness Vineyards, consults, installs and maintains vineyards on residential properties from the outskirts of Jamul to the inskirts of La Jolla (he also oversaw the planting of the new vineyard at Madeleine St. Sophie’s Center in El Cajon).

Fifteen volunteers gathered at Arnie and Marie Mueller’s property on April 19 to plant 200 vines of Merlot and Cabernet Sauvignon grapes. Greg and his business partner, John Keily, demonstrated the proper way to apply soil amendments, plant grafted vines, assemble and install plastic sleeves to protect the vines, stake to keep the sleeves in place and berm to keep water focused on roots.

My volunteer teammate and I favored the planting task. We donned gloves, sited the vines directly under the drip irrigation line, spread the roots and scooped the piles of amended soil into the pre-dug holes.

My previous vineyard experience includes pruning vines and picking grapes. This was my initiation into the much earlier phase of winemaking. Repetitively getting down into the dirt and standing up is tough on the knees and denim jeans, but a very satisfying role to play in the process.

Once the vines were in, we pitched in with sleeve installation and berming. When that was done, Greg gathered everyone for the presentation of a certificate to Arnie and Marie that bore the signatures of the volunteer crew that helped Honey Springs Vineyard come to pre-fruit fruition.

Arnie and Marie are newcomers to the world of grape growing. But since I knew they would have done their homework before embarking on such an endeavor, I asked Marie how soon the sleeves would come off. She replied that it would be a couple of years before they could uncover the vines.

Back home, I pulled a bottle of wine out of the chiller and felt a real sense of accomplishment for the day, as well as a renewed appreciation for the virtue of patience.