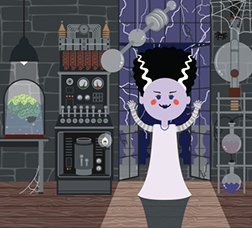 Did you hear the one about a group of people who would rather give themselves an electrical shock than be left alone with their thoughts?

It's no joke, apparently. Researchers (it’s always researchers, isn’t it?) at the University of Virginia put volunteers (thank goodness!) in a bare lab room and gave them a mild jolt of electricity. If given $5, they were asked, would they spend some of that money to avoid getting shocked again. Those who replied in the affirmative were then asked to sit alone for 15 minutes with the only optional activity of pushing the button that would give them an electrical shock.

A whopping two-thirds of the 18 men in the study and a less dumbfounding but nevertheless disturbing one-quarter of 24 women in the study administered themselves at least one electrical shock. One fellow pressed the button 190 times!

The results of this “enlightning” experiment speak volumes about the way our hyperstimulating environments have incapacitated our ability to be at peace with ourselves.

I’ve been doing my own (unrelated) research lately that led me to the discovery of an interactive Alert Shirt that just hit the marketplace. There are numerous wearable-technology devices on the cusp of closetdom, but most of them seem to be geared toward providing people with real-time biosignals to monitor what’s going on in their bodies — primarily to aid them with their fitness/performance goals. Fortunately, I have not run across any smart textiles that permit the wearer to voluntarily shock themselves if they are dissatisfied with their running time or distance (though, given the recent UV research, it’s entirely plausible that some "bwa-ha-ha" company might produce one).

The Alert Shirt allows a sports team fan to “feel what the players feel” on the field. I fail to understand why anyone would want to join quarterback Philip Rivers in his pain when he’s tackled by someone who looks like his name is Bubba. Sure, your bones won’t break, but it could hurt like they did.

On the tamer side, you have smart furniture (no, I’m not talking about smart as in an Eames design but, rather, as in being interactive). A two-page spread RadioShack ad I came across not too long ago explains how DIYers can make their own interactive chair: “How many times have you hunted around for your television remote, frustrated by the fact that you can’t easily turn on your television without the remote control?” the ad asks. “Wouldn’t it be so much nicer to simply sit down in your favorite chair in front of the television and have the TV turn on automatically for you?” (Does anyone out there even remember pre-remote days when you actually had to lift your butt off the sofa to turn a channel-selector dial?)

I’m not going to lay out the instructions here because, frankly, if you’re a DIYer, you can find them on your own. However, I will offer the legally recommended warning: If you find yourself sitting in your doubly smart chair (let’s assume you made your Eames interactive) wearing an Alert Shirt and you get the wind knocked out of you while watching a Chargers game, don’t spill your local craft beer on your “wired” shirt and chair. And if you do, please don’t let me know; the news I’ve been hearing is shocking enough.