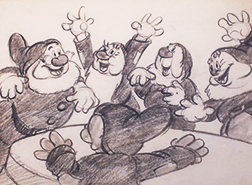 Perhaps it’s because the “cottage” with the wavy, cedar-thatched roof on the cover of our July issue looks like it could be the home of Snow White and the Seven Dwarfs that I was immediately intrigued by a press release I received this week.

The release announced that The Art of Fantasia and Other Disney Classics: The David Yaruss Collection is running from July 26 through Sept. 7 at California Center for the Arts in Escondido. It describes the collection as containing more than 250 original Disney animation cels, concept sketches, painted backgrounds and storyboard drawings featuring characters such as Pinocchio, Snow White, Peter Pan and, of course, Mickey Mouse.

I grew up, as most of my generation did, watching The Mickey Mouse Club and Walt Disney’s Wonderful World of Color. For me, it’s hard to choose a favorite Disney film. David Yaruss unequivocally says his favorite is Fantasia (thus the exhibition title).

The recently retired pharmacist living in San Carlos is putting his collection on public display for the first time. “It’s just too precious not to share,” he says.

David became a Disney collector serendipitously, after going to Comic-Con in 1975 when it was just a small show at the El Cortez. “If I hadn’t been watching the news, I wouldn’t have gone,” he says. “I thought, ‘That seems kind of interesting.’”

When he got there, the display of early Disney comics “hit” him. “I wound up spending 60 bucks, and I wasn’t making a lot of money at the time,” he says. At the next Comic-Con, he discovered animation cels. “It just fascinated me — the combination of nostalgia, the quality of the art and other things that go into it.”

Among his collection, the pieces that date back the furthest are two model sheets of Julius the Cat (“the first named character by Disney,” David notes) from 1923’s Alice in Cartoonland, which predates Mickey Mouse’s 1928 debut in the now-famous Steamboat Willie. His latest acquisitions are cels from Fantasia that he purchased through auction.

But one of the most rare pieces, he says, is not even an artwork. It’s a stock certificate for a jelly company called O-Zell, dated 1917 and signed by Walt’s dad, Elias.

“I consider myself a Disney historian now,” David says.

The value of any Disney collection is destined to increase, especially in light of the fact that today’s animated films are created in computers, not by hand.

“A lot of the concept work is beautiful, fine art,” David says. “I find it very inspiring and motivating when you know what went into these early characters. It took 24 cels per second of action. Snow White, Pinocchio and Fantasia have never been equaled, must less been bettered, because of the time involved.”

I’m on the same page as David. While 21st century film technology has been touted as making animation seem more “real,” I can’t forget taking my young niece to see 1942’s Bambi in a special theater screening sometime in the 1980s. After a sad turn of events, she whispered to me, “Aunt Jan, can we pretend Bambi’s mom didn’t die?” Pretending that something isn’t real isn’t real says a lot. I think I teared up as much watching Bambi as I did during the sad turn of events in 2009’s Up.

So it’s “Heigh-Ho,” off I’ll go to see the exhibition of David’s collection, because I think the Seven Dwarfs had it right when they sang “… where a million diamonds shine!”