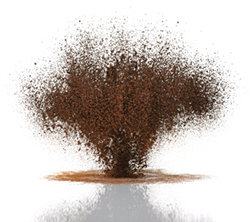 When our seven-strong retinue of SDH/GL staffers gathered on Monday morning at the San Diego Central Library for a photo shoot, I missed the coffee that Liz Crocker had picked up from Starbucks. I was in the underground parking garage directing our Chefs Hall of Fame nominees to the ninth-floor terrace for a group photo that will run in the magazine’s September issue.

Thanks to Marion Moss Hubbard, senior public information officer for the library, the photo shoot of 32 chefs went smoothly. She had arranged for chairs, a ladder for photographer Martin Mann, and a cart of cookbooks that we had the chefs hold to reinforce the fact that they were at the library. So we were out of there by 10 a.m. — still early enough for morning coffee back at the office.

Kim O’Donnell brought back two large boxes of donuts that were left over, but I eagerly awaited Liz’s arrival with the leftover Starbucks coffee. Alas, she informed me when I approached her with mug in hand that there was no coffee left. She even showed me how little she had managed to drain from the 2.5-gallon Starbucks Green plastic container into her own mug (less than an inch-deep of black liquid).

I’m not one of those folks who stand in line for a barista-prepared Latte Grande in a 10 percent post-consumer recycled fiber cup with my name written on it. I just rely on Eva Ditler, who graciously makes coffee in the SDH/GL kitchen every morning even though she herself drinks tea. She arrives by 6:30 a.m., so by the time Kim and I (the early-arriving coffee drinkers) shuffle back to the kitchen for our morning brew, all we have to do is stick our mugs under the spout of the coffee pump.

The day after the photo shoot, I took note of the leftover 10 percent post-consumer recycled fiber cups with the trademarked Norse mermaid logo and decided to try an experiment. Could the power of suggestion work if I poured our standard office coffee into a Starbucks 10% PCRF cup?

To further the self-deception, I wrote my name on the cup and checked the “Custom” box. Eva offered to take the cup from my office back to the kitchen and call my name. I declined her overture, because I hadn’t put a lid on the cup and prefer heeding the advice on the cup that the beverage I’m about to enjoy is extremely hot. Then again, perhaps that’s where my experiment went awry; because the coffee tasted pretty much like it always does. It could be my mind would have been tricked by a faux-barista tactic.

Coincidentally, I received an email on Monday that said Coffee Ambassador, a local, family-owned business, has developed “distribution relationships” with Starbucks and Coffee Bean & Tea Leaf. So I visited the coffee service company’s website to see what else it had to offer. I discovered that it has an Ambassador Café that the public can visit and see their equipment in action. In addition to Starbucks and Coffee Bean, the café serves Peet’s coffee and Dove hot cocoa — and you can make your own cappuccino. On top of that, the café has Wi-Fi! I wonder how many days in a row I could go there without having them lock the door when they see me getting out of my car.

Call it java karma. I received two other recent emails related to coffee.

The first informed me that local dentist Thomas Fitzpatrick has started a direct-trade, organic coffee company called Cura Coffee Co. For every bag of coffee sold, 10 percent is donated to The Foundation for Worldwide Health, which provides dental care to farmers and their families in Nicaragua. Consumers also can register a cause of their choice and share a link so that 20 percent of every order from that link goes to their charity in addition to the 10 percent to the foundation.

The second informed me that Oakland-based Blue Bottle Coffee is making its Southern California debut at The Curious Fork, a new café and culinary center in Solana Beach. I’m not familiar with Blue Bottle coffee, but I could get lost in their website like I could a good book. Check out the descriptions of their grinds. Here is an excerpt: "If the Hayes Valley Espresso can be like consuming a volume of In Search of Lost Time in liquid form, then the 17ft Ceiling is like flipping through The New Yorker — edifying without being taxing."

As for Coffee Ambassador’s website, I found a trivia page through which I learned that Bach wrote a coffee cantata in 1732, that Scandinavia has the world’s highest per capita annual coffee consumption and that the Japanese have been known to bathe in coffee grounds fermented with pineapple pulp to reduce wrinkles and improve their skin.

It sounds like I have another experiment to undertake. Hey, Eva, save those grounds for me!