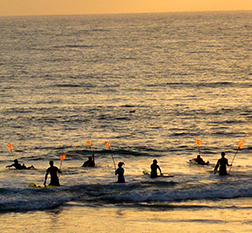 The next time you are at 32° 57' N, 117° 15' W, try asking a local for directions. Chances are they’ll tell you your destination is “up” or “down” a particular road. I’m not sure if they imagine themselves on the side of a mountain, if they haven’t figured out that it’s a breeze to determine compass points as long as you bear in mind that the nearby ocean lies west of land or whether they never mastered the difference between right and left. But three people in the course of one hour told me that Ralphs was “up” or “down,” which left me literally turned around three times.

I’ve dubbed this the Delmartian Equation. I’ve taken this scientific approach, perhaps, because I spent part of yesterday afternoon with a neuroscientist.

I went to the neuroscientist’s Del Mar residence to interview him and the architect who designed the house. I also was there for the photo shoot for the feature that will be published in San Diego Home/Garden Lifestyles’ September issue.

I had stopped at Ralphs for fresh flowers and fresh vegetables to use as “props.” Senior Editor Phyllis Van Doren had suggested sunflowers would be ideal for this particular occasion. When I carried them into the house, the neuroscientist asked, “You’re not going to leave those here, are you?”

It doesn’t take a scientist of any sort to recognize his reaction as unusual. But, as I quickly learned, it was precisely a “reaction” that he hoped to avoid: He is extremely allergic to sunflowers.

Fortunately, his allergy did not prevent us from using the sunflowers for the shoot. They’re not particularly aromatic blossoms; he just couldn’t touch them.

I once planted sunflowers on the edge of my vegetable garden. They grew tall and beautiful, but the flowers put their sunny sides toward my neighbor’s yard. Apparently, I planted the seeds backwards. Or maybe sunflowers just have it out for me.

But to progress in the chronicle of my Delmartian day, at the conclusion of my interview, I went to Del Mar’s annual Summer Solstice celebration at Powerhouse Park with Liz Crocker, who also works at SDH/GL.

I’m still in the “marveling stage” over living near the ocean. Upon our arrival, while I gazed past the wine and food stations and the Semisi & FulaBula band to the vast Pacific, I pointed out to Liz, “It’s the ocean. Right there.”

Fortunately for me, Liz didn’t call the medics. And upon this reflection (a lesson in tolerance?), perhaps I should apologize to Liz and everyone else who lives in Del Mar for making fun of their propensity to use “up” and “down” in lieu of more indicative navigational words. Besides, as we entered the park, we were handed glasses printed with the latitude and longitude of Del Mar (as noted in my opening sentence above), so clearly they have nailed the concept of compass points; they just choose not to use them. It’s apparently just a quirky Delmarism.

Many Del Mar restaurants served marvelous hors d’oeuvres in true solstician fashion. I especially enjoyed the shrimp and grits from Sea & Smoke, the ahi on a sesame tortilla triangle from Sbicca and the tempura squash blossom with a white fig and balsamic reduction from Zel’s. Liz took a liking to the coffee IPA from Stone Brewing, while I enjoyed a Bordeaux blend from Rancho Santa Fe-based Gen 7 Wines. Gen 7 winemaker/owner Tim Bacino told me that he plans to open a tasting room in the near future.

There was more wonderful food, beer and wine, as well as a silent auction to benefit the Challenged Athletes Foundation Operation Rebound Del Mar Surf Clinic. And Liz and I ran into several people we knew, including two folks we hadn’t seen for some time. The real estate agent who sold Liz her house was one of them. The other was a sales manager for Ahnfeldt Wines, whom I first met at a wine shop in Palm Springs. He has one of my all-time favorite names: Random Hazard. I confessed to him that I had appropriated his name for a character in a romantic comedy science fiction novel that I published in 2009.

At dusk, we watched surfers paddle out into the surf with tiki torches (shown above), which was a new addition to the annual Summer Solstice event.

The summer solstice actually arrives tomorrow at the moment the sun shines directly on the Tropic of Cancer, an imaginary line north — or, as Delmarians would likely say, “up” — of the equator.