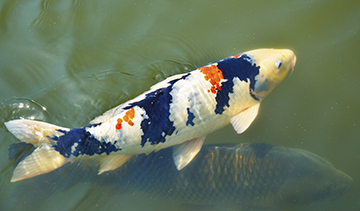 I’m standing at the edge of Frank and Susan Oddo’s fish pond in Elfin Forest, gushing over a koi with fluttery long fins and a ruffled tail. Apparently, I’m lavishing my approval on the wrong carp. In the koi kingdom, this one is considered by many to be a mutt of uncertain ancestry.

Frank points out one of his more precious fish. This silky white koi flaunts a red patch on its head that looks like the rising sun on a Japanese flag. Frank explains that this fish has value because the red patch is clearly defined and it doesn’t travel beyond the eyes into the nose area.

I learn that the pattern showcased on the fish helps determine a koi’s worth, but it’s not the only piece in the price puzzle. Balance is a big deal: The pattern should be symmetrical, and even the scales should be lined up uniformly. In shape, a koi should look like a torpedo; and, as any fisherman knows, the bigger the fish, the better. Striking colors are key, too: White has to be pure with no hint of yellow or gray; red’s shade ought to lean toward persimmon, not crimson; black markings must be pitch dark.

With new knowledge, I pick a different favorite: a red, white and black fish that reminds me of a Japanese ink painting. The black markings, which appear on the head and extend vertically throughout the body, look like they’ve been painted on with a fine brush.

If I heard Frank right, I think he said my updated pick came with a six-grand price tag (a bargain compared to the $340,000+ someone else paid for a prize-winning fish in 2012). And, here’s a shocking tidbit he shared: Even though you might pay thousands of dollars for a baby koi, by the time it’s an adult, it could be practically worthless. The markings change, and that change can be unfavorable. In other words, buying an expensive fish is a crapshoot (or should I say carp shoot?).

There’s also the gamble that an expensive fish will go belly up before it reaches adulthood. There are diseases like ich and dropsy and parasites like flukes and anchor worms. To make sure your koi live a long life (and they can live 30 years or more), you need to have the correct-size pond with the right depth of water for the amount of fish you own, maintain filters, test the water for nitration levels and algae, make sure the water is the correct temperature, change the water, feed the fish properly, etc., etc.