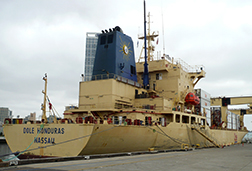 Someone summon Eddie Cantor back from the grave and tell the poor “Yes, we have no bananas” crooner that his ship has come in! When I toured the Port of San Diego last month, I learned that Dole imports 185 million bananas a year from Ecuador and Costa Rica right into San Diego harbor.

I discovered this impressive datum after I had pondered why I was handed a banana as I boarded a tour bus with other members of the San Diego Press Club (see below for information on your opportunity to tour the port this weekend).

I’m sure I would have found it considerably more puzzling to have been handed a less-easily-peelable pineapple, which Dole also imports to our fair city. I hate to sound unappreciative of the fruit, but, frankly, I’d rather have been handed keys to a car. Last year, The Pasha group received 383,000 automobiles at the National City Marine Terminal.

If you think the Costco parking lot on a Saturday is something, you should see the sea of cars at the terminal. On the day I was there, Pasha Manager Dave Nagy said there were 20,000 vehicles awaiting transport by train or truck to dealers hither and yon. Most of the Audi’s Hondas, Kias, Volkswagens, et al., that I counted (no, I didn’t really count them; I would still be there) were wrapped in protective skins, so the visual impact was a near whiteout. Dave pointed to the Jean Anne and said the ship has adjustable decks that allow her to haul massive, unboxable freight like Black Hawk helicopters.

I didn’t see any cargo there that day larger than an Azusa (there were, just to be clear, thousands of them — but they all were of identical size). However, I saw wind turbines (or, rather, the parts thereof) ready to be loaded onto the Ocean Giant at the Tenth Avenue Marine Terminal. The turbines, said Connie Lefevre from the Port Authority’s Trade Development Office, were on their way to Honduras.

I’ve seen wind turbines up close and have even been inside one during a wind farm tour in Palm Springs, so I grasp their colossalness. I doubt even the Jean Anne could carry assembled wind turbines. After all, a 65-foot-long Black Hawk pales in size compared to a typical turbine of 300+ feet tall (or long, if lying prone) with a blade more than 150 feet long.

Pasha, by the way, processes more than cars, helicopters and yachts (apparently sailors in the Transpacific Yacht Race from L.A. to Hawaii are too tired to make the return journey in their own boats, so they use the Jean Anne to haul them back — not that they’re tied behind the Jean Anne, mind you — to the mainland). Pasha also handles 77,000 tons of lumber being exported each year from the Pacific Northwest.

Joining the Dole Honduras, Ocean Giant and Jean Anne as water-plying vessels along the San Diego coastline is the Reuben Lasker. The National Oceanographic and Atmospheric Administration, which commissioned the 208-foot ship into its research fleet earlier this month, is renting a warehouse at the Tenth Avenue Marine Terminal.

In addition to all the importing, exporting and research, the San Diego port serves a vital role in ship repair. There are three ship repair facilities for large ships and a boatworks company that repairs yachts (Dave says they’ve worked on the yachts of Microsoft co-founder Paul Allen and singer-songwriter Billy Joel).

Just thinking about all this activity is enough to make your bow spin.