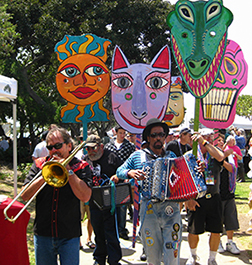 Two or three times a day during Gator by the Bay, musicians
and festival-goers parade around the grounds Mardi Gras style.
Photo by Peter Oliver

When you go to an event called Gator by the Bay Zydeco, Blues & Crawfish Festival, you don’t expect to see a herd of line-dancing do-si-doers wearing Stetson hats and cowboy boots. But there they were, early Friday evening, whooping it up on the Festival Stage dance floor to harpist Lance Dieckman and singer Annette da Bomb’s bluesy rock ’n’ roll rendition of “You Ain’t Nothing But a Hound Dog.”

I guess I shouldn’t have been surprised. In the relaxed style of New Orleans, anything goes; so a little rock ’n’ roll vibe mixed with dancers in western garb who looked like they’d all taken the same swing, tango and waltz lessons is par for the course. Besides, for me, watching the crowd is as much fun as listening to the music.

If I had to award a blue ribbon to the person with the most dress-up flair for being outlandishly fun, it would have been a tossup between the over-50, 6-foot-tall, blond bombshell with legs up to here, wearing a shirt that just covered her derriere, black tights and matching black, knee-high spats and the 70-something ballerina/usherette, whose buzz-cut silver hair peeked out beneath a black pillbox hat and whose long legs stretched beneath a many-layered tutu that looked like it belonged to a child.

It seemed as though all of these whirling dervishes, whether age 20 or 100, were having too much fun to sit down for even a minute. I turned to the tattooed, Converse-wearing kid behind me to ask him if everyone was from the same dance group, but he didn’t know. Turned out he was Cajun and Lance’s roadie. When he asked me if I would like to dance, I knew it was time for me to go. The last time someone insisted I dance with him even after I told him I had two left feet, he cut the dance short and said, “You were right. You don’t know how to dance.”

It seemed a little voodooish, though, that when I got off the itchy bale of hay I was sitting on, the first thing I noticed was that the Bon Temps Social Club Dance Pavilion was offering Friday-only zydeco dance lessons. I hope no one sticks pins in a look-like-Eva voodoo doll because I didn’t take them up on the lessons.

On my way out the gate, I passed by people munching crawfish and noticed that Linnzi Zaorski, a well-known, New Orleans indie jazz singer and songwriter, was belting out songs on the Bourbon Street Stage while pouring bubbly for herself and her band. Now, that’s the spirit of the New Orleans I remember.