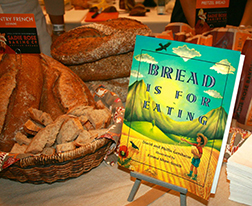 There’s a new book out called Fictitious Dishes in which Dinah Fried has photographed tableaus of foods described in classic literature. I heard her being interviewed about it on NPR last week. I am not certain I would give the book much credence had it neglected to include Proust’s madeleines.

From the year I devoted to reading all seven volumes of Remembrance of Things Past, I recall how Proust waxed on rapturously about the French pastries.

Muriel Barbery expressed a similar adoration for madeleines in her book The Elegance of the Hedgehog. I don't know why these shell-shaped cookies that require a dedicated mold pan (a product clearly created for those who eschew multifunctionality) deserve such authorial attention, but I do understand how the introduction of food into a plot can be symbolic, evoke a feeling and/or send a reader to the kitchen for something to eat.

And so it’s not a far leap to think that books also could send a chef to the kitchen to whip up something inspired by a story.

For examples of how that might work, one can do no better than to partake in the San Diego Council on Literacy’s Eat.Drink.Read fundraiser on May 14 at the McMillan Event Center at Liberty Station. Chefs from local restaurants will present dishes inspired by specific books to help raise money for the council’s 26 literacy programs. Guests can sample cuisine and local craft beers, as well as tastings from a chocolatier, bread maker, coffee roaster and wineries.

Chef Adam Cho of Mistral at Loews Coronado Bay Resort will be offering yellowtail and white peach ceviche inspired by Roald Dahl’s James and the Giant Peach, which he says is a childhood favorite of his. “Plus,” he notes, “peaches are in season.”

“The book shows how making tamales is a beloved activity in Mexican culture,” he says. “We’re celebrating this tradition with our flavorful Tamales de Pollo, made from our own Casa Guadalajara family recipe.”

Chef Matt Sramek from Amaya at The Grand Del Mar will be serving beef short rib bourguignon with a smoked bacon soubise and trofie pasta, inspired by Julia Child’s My Life in France. He’s taking a little bit of liberty here, because his dish is based on a recipe in her first cookbook, which she mentions in her autobiography. But I’m sure no one who tastes his gourmet cuisine at Eat.Drink.Read will quibble over this minor detail. After all, the whole idea here is to raise money for the San Diego Council on Literacy, which offers free reading instruction to more than 440,000 adults in San Diego County with a below-standard level of literacy.