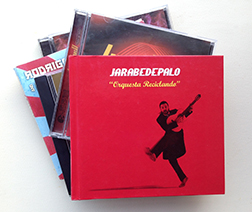 Amazon had suggestions for me this week, including Juanes, Romeo Santos, Zucchero and Flaco & Max. The megamerchandiser based its suggestions obviously not on my Germanic surname, but on my previous purchases of Latin rock CDs.

Prior to moving to San Diego, my CD collection weighed heavily on the smooth jazz end of the musical scale. After my relocation to become San Diego Home/Garden Lifestyles’ editor, I discovered a Latin rock radio station (broadcast from Tijuana).

My defection from smooth jazz started with my Amazon order of El Tri’s Ojo Por Ojo.

While listening to the radio station (98.9 MORE FM), I have even heard Spanish versions of David Bowie’s “Under Pressure,” Steve Miller’s “Serenade of the Stars” and Soft Cell’s “Tainted Love.” This morning, I heard a rap song by Plastilina Mosh with a sprinkling of English (“I am going to say I do look gorgeous”).

So with my musical horizons broadened, I checked out Amazon’s recommendations — personally selected for me by the merchandiser gigantesca’s algoritmos. Admittedly, I ignored the CDs of Shakira and Enrique Iglesias. They’re too mainstream for me now. But I clicked the “Learn more” button for Juanes, who, Amazon says, is “the world’s foremost Latin rock artist.” Below the list of tracks, I saw that customers who bought the Columbian’s CD also bought Shakira’s and Enrique Iglesias’ new CDs. Wait a minute. Is this a trick Amazon is trying to play on the unsuspecting?

Regardless, I also clicked the “Learn more” button for Zucchero — only to discover that he’s Italian (his real name is Adelmo Fornaciari). According to Amazon, his new CD came about from “a trip he made from New Orleans to Cuba via Mexicali.” Remind me not to ask an Italian for travel directions.

My next click revealed that David Bisbal of Spain has recorded with Miley Cyrus, which, in my book, was a strike against him. The cover of Wisin’s El Regreso del Sobreviviente (The Return of the Survivor) looked menacing, given his scowl, black tattooed upper arm and sleeveless black leather hoodie. The CD includes contributions by Jennifer Lopez, Ricky Martin, 50 Cent and Chris Brown. I just don’t care for rap — in any language.

Flaco & Max (“at once pillars of the past and forgers of the future,” Amazon claims) play accordion-driven Tejano conjunto music, so I didn’t even sample their tracks.

There were other recommendations, but, in the end, I didn’t put anything into my Shopping Cart (Amazon capitalizes this, I guess to distinguish the virtual basket from the ones with a chronic tendency to develop crooked wheels, bang into cars in parking lots and have handles that you are encouraged to degerm with a sanitizing wipe).

For anyone who wonders, my favorite, favorite (yes, I know that’s redundant, but so are so song lyrics) Spanish-language tune is Jarabe de Palo’s “La Flaca.” I even sing along on the chorus:

I don’t know Spanish well enough to know what I’m singing. But I never let that stop me before, to-wit:

Semolina Pilchard climbing up the Eiffel Tower
Elementary penguin singing Hare Krishna …
I am the eggman, they are the eggmen
I am the walrus
Goo goo g’joob