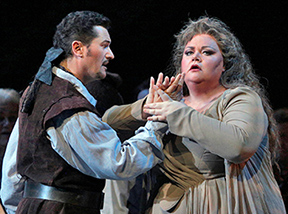 My 24-year-old daughter, Chelsea, likes to follow the rules. If she gets a bookcase from IKEA, you can bet she’ll huddle down to read every word of the instructions. Once that’s done, she’ll check that she has all the needed materials pictured and carefully group them in a logical fashion. And when all that’s been accomplished, she’ll patiently follow each step in exact order. Eventually, without any swearing under her breath during obstacles, she’ll have a perfectly put-together piece of furniture.

That’s why it came as no surprise to me when she insisted on doing research before choosing San Diego Opera’s Pagliacci, The Elixir of Love or A Masked Ball when I invited her to her first opera experience.

After dutifully reading the scenarios on Wikipedia and listening to arias on YouTube, she still couldn’t make up her mind, so she went to a website called “reddit opera” and asked for advice. She got 14 replies, fairly evenly divided between preferences. Three were noncommittal. Four chose Pagliacci: “In terms of first operas, usually the shorter the better” was the general consensus. Four others picked Elixir: “Nobody dies, people get drunk and fall in love.” Hmmm. Four people opted for A Masked Ball, all of whom mentioned Stephanie Blythe. Said one: “Stephanie Blythe will blow your mind — that and I’m in the chorus. But Stephanie freakin’ Blythe. Her voice is a force of nature.”

In the end, Chelsea left the choice with me. But, other than knowing the expression “It ain’t over until the fat lady sings,” I’m no opera expert. I have seen but one opera, (OK, musical) on stage: Cats. My opinion? The high, screeching soprano voice seemed like a pretty good imitation of a cat in heat to me.

I decided to go with Stephanie freakin’ Blythe and A Masked Ball. I’ve at least heard of Verdi and know the historical story of King Gustav III’s murder. Plus, what girl in her right mind doesn’t want to fantasize that two men — one a king, one a count — are madly in love with her?

Thank goodness we decided to get dressed up for the occasion. Although I told Chelsea that we shouldn’t wear jeans, I was not expecting so many San Diegans to dress in gowns, sparkles and furs (hopefully, not real).

A Masked Ball was three hours long (including two short intermissions) and a deep dive into opera for a first go-round. We agreed that the sets and costumes were divine, that we preferred the chorus to the arias and that Stephanie Blythe has a formidable voice (and that, in her gown, she reminded us of Ursula in Disney’s The Little Mermaid). Our favorite singer was soprano Kathleen Kim, who played Oscar. Judging from the applause, the audience loved Kathleen too, but preferred the three main characters (Piotr Beczala as Gustav III, Aris Argiris as Count Anckarström, Krassimira Stoyanova as Amelia) and Stephanie freakin’ Blythe.

On the way home, I asked Chelsea if she’d like to venture forth to the opera again some time. “Let’s go to the next one,” she said, “Verdi’s Requiem on March 20.” Seems she already researched that, too.