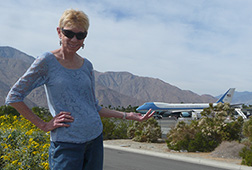 Barack and I went to Palm Springs over the Presidents Day weekend. Granted we did not arrive via the same method of transportation, as he traveled from D.C. and I traveled from San Diego, which was off-course for Air Force One. (One can imagine the complications that would attend even the slightest detour, as well as the likely criticism over wasted tax dollars, especially since a 747 consumes more fuel than my Chevy Tracker, whose fuel is paid for entirely by me).

Certainly I would have enjoyed traveling with the Commander in Chief, but at least I had Adele, Prince and Tom Petty to keep me company. I also had the soundtrack of Evita, so at least I could pretend I was watching an in-flight movie.

Perhaps because it was a three-day weekend for some folks, traffic was particularly heavy; and it took me an hour longer than usual to make the trip. No doubt the Boeing with the tail code 29000 had no such issues. However, my diligence was rewarded as I entered the valley along the base of the San Jacinto Mountains and saw a glorious full moon rise over the San Bernardino Mountains. Nature has a knack for reminding you what’s important.

In any event, I still arrived an hour earlier than No. 44. The President stayed at Sunnylands in Rancho Mirage. I stayed at my house in Palm Springs. There are drastic differences between the two properties; for example, mine does not feature a golf course and is considerably smaller than 25,000 square feet. However, there are a few similarities: midcentury modern architecture, pink stucco walls outside, canary yellow inside and a sculpture in the living room (though mine is not a Rodin, it better suits my personal taste).

The President dined on Friday evening with Jordan’s King Abdullah. I have no reason to doubt that His Majesty is a fine conversationalist, but I can state with certainty that my dining companion was brilliant.

The POTUS went to a second golf course estate in Rancho Mirage (Oracle CEO Larry Ellison’s Porcupine Creek) to golf with friends. I went to a condo in Palm Springs to taste a selection of wines with friends. Like me, the condo owners don’t have a golf course; but they have an impressively large urn in their dining room and a battery-operated lantern that came in handy when a transformer blew.

Fortunately, I had time on Saturday to check on Air Force One — not that I worried it might not be in good hands, but simply to see a tangible representation of my tax dollars. Apparently, this was not a novel idea, as there were plenty of others traipsing across the sandy approach to the edge of the airport where the behemoth posed for its Kodak moments. I climbed onto my companion’s shoulders to take pictures above the fence line.

Two couples disinclined to follow my “athletic prowess” asked if, as long as I was so perched, I would take photographs with their cameras. My companion commented that we should have set up a concession. As I said earlier, he’s brilliant.

So if you happen to find yourself in Palm Springs the next time the President meets another world leader at Sunnylands, look for me at the south end of the airport. Bring your camera and cash and you can have an image like this of your own: 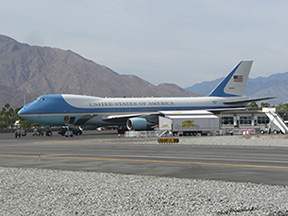