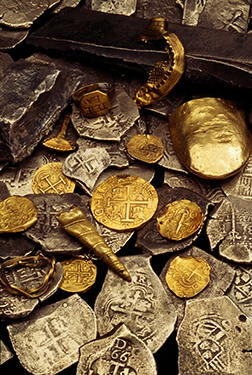 Instead of running into Johnny Depp at opening night of Real Pirates: The Untold Story of the Whydah from Slave Ship to Pirate Ship, I met two strangers, one of whom, according to her nametag, was a board member at the San Diego Natural History Museum where the exhibition is being showcased. She and her husband joined me at the little round table where I was hugging my glass of wine, my only company thus far except for the bowl of scurvy-preventing tangerines that served as the centerpiece.

Instead of discussing the exhibit, though, they steered the conversation toward home design (my nametag also was a dead giveaway: Eva Ditler, Managing Editor, San Diego Home/Garden Lifestyles). They wanted to know what was on the way out as far as home materials were concerned. Well, I’m no Phyllis Van Doren (SDH/GL's Senior Editor and author of our spring and fall Interior Design Reports), but I’ve worked at the magazine long enough to know a few things.

Then, of course, they wanted to know what was replacing granite.

“Engineered quartz, you know, Silestone, CaesarStone,” I said, confidently. (I may have looked rather foolish in the piratical scarf someone wrapped around my head when I arrived, but I knew my stuff.)

Next question: “Who’s your favorite builder or contractor?”

“What about Jackson Design and Remodeling?” (Who were these people, really? Spies?)

“Well, they are wonderful, but I don’t have a favorite. I do have a favorite style of house and that would be Mid-century Modern, probably because ….”

Ah, saved. Theresa Kosen, director of the museum council, had stepped up to the lectern and begun the preamble. At the same time, SDH/GL Editor Janice Kleinschmidt, my “date” for the evening, slid into the spot next to me.

Theresa introduced the star of the show: Barry Clifford. No, he’s not a pirate. He’s the underwater explorer who discovered the remains of the Whydah (or as Janice jokingly referred to it later, the “Why? Duh”), the first fully authenticated pirate ship discovered in American waters and the main subject of the exhibition, along with artifact recovery, conservation processes and, of course, pirates (duh).

The first item unveiled when we went up the stairs to view the exhibit was Wydah’s bell, inscribed “Whydah Galley 1716.” Its discovery authenticated the shipwreck site. There were many billboards of information about the ship’s captain, Sam Bellamy, and his piratical crew — including an 8-year-old boy who left his mother’s side and insisted Sam Bellamy take him on (spoiler alert: both the boy and the captain were lost at sea in a storm); about pirates in general; about 18th century Caribbean life; and about Barry Clifford and what it takes to uncover a shipwreck. Showcased items included the ship’s rigging and tools; pistols, muskets, cannon and swords (shiver me timbers!), navigational tools, artifacts representing the stuff that real pirates use (including an actual commode – ew!) and, finally, a treasure chest loaded with booty (“authentic coins last touched by real pirates” — oh, my!). In fact, one of the hands-on activities was being able to touch authentic pieces of eight that pirates had touched. (I will never wash my hands again!)

Here’s a tip: If you want to touch the booty that’s been pirate-handled, learn about the history of piracy and have underwater archaeology explained to you, February 2014 is the silver anniversary of museum month in San Diego. With a pass, up to four visitors can gain admission to the National History Museum and 43 other participating museums for half-fare; and the pass can be used all month long. Passes are available — while they last —at Macy’s in San Diego, Temecula and Imperial Valley. All hands on deck!