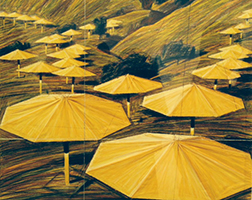 Though his quick-fire, thickly accented speech makes it impossible to catch every word and even whole sentences, and though his response to a question may not actually answer said question, Christo makes certain things crystalline.

The artist whose body of work defies an attempt to encompass it in one tidy phrase appeared at the La Jolla branch of the Museum of Contemporary Art San Diego on Saturday to mark the opening of an exhibition primarily composed of a collection David Copley bequeathed to the museum. By the time I arrived for the lecture a half-hour before the doors opened, a line of ticketholders had formed down the sidewalk to the left of the museum and a line of ultimate optimists (the sort of people willing to stand outside on a cool Saturday pre-evening in case some of the folks who bought every last available ticket would suddenly find themselves otherwise occupied [I won’t say “ill,” since I am loathe to characterize ultimate optimists as opportunists in the face of someone else’s misfortune]).

In any event (a delightfully efficient segue), Christo immediately charmed the La Jolla audience. And given the enthusiastic standing ovation at the end of his talk (yes, I know it begs the question whether one can have an unenthusiastic standing ovation), I am certain that no one objected to his attire: jeans; nondescript striped shirt; and an unstructured tan jacket with cargo pockets, many of which bulged. Not that anyone should object to his attire. But I could not help but wonder what he carried in the pockets — a musing much like that one harbors about the contents of Queen Elizabeth’s omnipresent handbag.

Alas (another very concise segue), I have notes upon which I have yet to touch. As mentioned at the get-go of this blog, it is difficult to grasp every Christoish detail, but certain things stand out, to-wit:

The first words out of Christo’s mouth acknowledged his late wife and partner, Jeanne-Claude. She was, is and will continue to be a force in his thinking and process (he still says “we” and “our”).

The first slide he showed was of The Umbrellas, a joint installation of yellow umbrellas along the Tejon Pass in California (shown above is his sketch on display at MCASD) and blue umbrellas in Japan. I saw the California umbrellas in 1991 and will forever remember the impact they had upon me. I actually had low expectations, even though (and, perhaps, because) the person who took me to see them had glorified the temporariness of Christo’s work. I didn’t “get it” — until I experienced the magnitude of the altered landscape. I seem to recall actually tearing up a bit when we crested a hill and I grasped the scope of what an artwork could be.

One of the questions asked by an audience member after Christo’s slide-show presentation was how he wanted people to experience his work.

“There are no rules to interact with our work,” he said. “They have an open dimension that is not something we regulate.”

Certainly other artists say that their works are open to interpretation by individuals. Yet I felt that when Christo spoke there was a particular humbleness given his celebrity status. One suspects an artist like Andy Warhol or Jeff Koons would answer differently.

Another particularly striking point is that Christo does not consider the large-scale nature of his and Jeanne-Claude’s projects as being “big.” He referred to the areas they altered as “spaces that we know around us on a day-to-day basis.” He quoted Jeanne-Claude as saying, “What we like to do is create a ‘gentle disturbance.’”

While most of us would probably want our contributions to society to be translated into monuments that generations to come would view, Christo and Jeanne-Claude have created a world (a term I do not use lightly) that he described as an “irreplaceable moment.” Having experienced (versus having merely “seen”) The Umbrellas, I concur with his terminology.

Furthermore, while a collector such as David Copley could purchase a sketch of a proposed installation, the work itself is untouchable by collectors.

One audience member wanted to know how Christo and Jeanne-Claude felt when their installations were, as they must be, taken down.

“We are relieved,” Christo replied succinctly, eliciting chuckles. After a pause, he continued, “We are renting that place. We paid rent of $3 million to the city of New York [for The Gates]. That became our property; we were responsible for everything. Sixteen days are so expensive. After 16 days, we are relieved.”

As much as I would have liked to known what items lied within the depths of his jacket pockets, I had a larger question: “Given the years of time it takes to get permission to execute your visions, how do you maintain your perseverance?”

He replied that in 50 years, he and Jeanne-Claude had “realized” 22 projects and had failed to get permission for 37. Unfortunately, he revealed no secrets to how they managed to persevere in the face of challenges. And, yet, the next day when I found myself frustrated over my ability to accomplish an artistic task in the time frame I expected, I did think, “What would Christo do?”

The answer may be in his conclusion on the MCASD stage, when he proclaimed that art was not his “profession.”