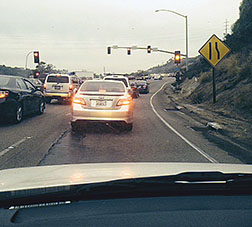 I spent quite a bit of time in my car this week, going to interviews and photo shoots and events related to my job. So I had plenty of time to think about certain truths that I now hold to be self-evident from my education on San Diego County roads since moving here a little more than a year ago.