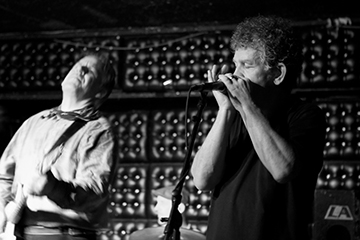 It seems unfair that, without formal lessons, David (shown above playing with The Bedbreakers) can soulfully hit those blues pitches with speed — and he’s probably improvising. I guess you’re either musically inclined or you're not. Unhappily, I fall into the latter category.

From grade two through grade six, my mom enforced weekly piano lessons. It wasn’t that I had begged to be taught or that she discovered I had an ear for music. It was because she thought instrumental instruction, like household chores, would be good for me.

I assume the piano was chosen rather than the violin, flute, oboe or any other smaller instrument because my dad got a “good deal” on a used antiquity that, at one time, had been a functioning player piano.

My dad, a fix-it-yourself handyman kind of guy, had grand plans to eventually make the player operable again. He also envisioned glass within the large wooden cabinet so that the hammers could be seen striking the strings as the music roll passed over the perforation holes to sound out the notes.

In the meantime, we managed to cram the large wooden upright along the wall of our tiny dining room so that my sister and I could take lessons from Mrs. Cadieux, who lived two doors down.

I showed off my musical prowess at my first lesson. I told Mrs. Cadieux that our piano at home must have been the wrong size to play properly. (She owned a 36-inch-tall, “normal” upright; ours was a more-than-45-inch-tall giant.) I couldn’t wait to get home from my lesson, so I could relay what I had been taught: If we washed our piano, it would shrink!

After four years, I gave up on lessons. Although, in all that time of formal instruction, I did manage to learn how to read music and could play a bit more than “Chop Sticks,” I noticed that in my last halting, mistake-ridden etude performance, audience members were so delighted with my playing that they winced.

Which brings me back to David. When he expresses himself through his harmonica, the audience is jumping, not wincing. If you decide to go see him and his band play, get to the Riviera early for the fun of grilling your own steak and to ensure a good seat in the Turquoise Room.

Don’t expect a sleek nightclub, though. The Turquoise Room is a retro cocktail lounge with leather booths and red lights. When I went, the noise precluded any conversation; the mood was wild and the crowd young. The place was so packed that servers with filled trays needed snake-slithering skills to wind their way through the throng gyrating along the aisle next to the tables. (There is no dance floor.)

Hmm. Perhaps David’s wife, Dawn, could put her designer hat back on and throw them a bid for a remodel …

My father fixed the player piano, which now has a basement location. It’s for sale —
along with the music rolls — but the buyer will have to figure out how to lug it up the stairs.