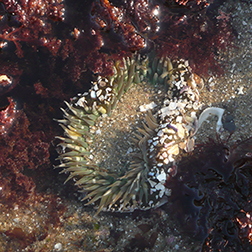 But tut tut, because no other day through December 31, 2014, will see — barring a tiff between the Earth and Moon that causes them to seek new orbits — a tide as low as the one on New Year’s Day.

Apparently my friend and I were not the only ones who “got the memo.” When we arrived at Cabrillo National Monument in Point Loma shortly before 2 p.m., we discovered a long line of cars parked outside the gates and a long line of cars waiting to go through the gates. A sign at the turnoff down to the tide pools advised that the parking lot below was full (though some people — probably the same ones who push on a door marked “pull” — don’t allow signs to guide their actions).

In any event, we parked in the lot near the visitor center and trod down the 3/4-mile-long, sidewalk-less road to the tide pools, where we found so many people looking down, bending over and crouching that I could hardly imagine a more frightening prospect for any sea creatures caught unawares (I wonder if perhaps NOAA has considered posting tide charts underwater where they might be useful to the watery introverts who prefer to keep a low profile).

I hoped to see a starfish. Most of all, I would have liked to spy a dolphin or a mermaid, but I had no unrealistic expectation of seeing either. So I would be content spotting a starfish. Instead, we saw anemones (above), hermit crabs, mussels and turban snails (below) in the shallows and barnacles and a turban snail or two on uncovered rocks. We wandered around until 3:30 (just in case some finned/flippered marine life was waiting to make a grand entrance). Almost immediately after that, it seemed the ocean began to reclaim its “footprint.”

I would say that we retraced our steps back to the higher-tide shoreline, but that’s not the way tide pooling works (not that I consider myself an expert after one outing). The point is that finding a route amid pools of water is a process that comes to you as you lift a foot and set it down.

I have to admit that I was a tad disappointed in not making a Cousteau-worthy discovery, so I did not turn away when I overheard a couple of people at one pool indicate they were looking at an octopus chowing down a small leopard shark. I walked right over and took a photo (below). I’m sure this would have seemed tragically insensitive to the shark were it aware of my voyeurism. But it was already dead (that is to say, there was not even the slightest tail movement to be noted). And this was, as National Geographic and the Discovery Channel would point out, just the course of nature.

As we hiked back up the 3/4-mile-long, sidewalk-less road, I noted another sign telling drivers to watch for wildlife. I would have liked to spy a wildebeest or a gazelle, but I had no unrealistic expectation of seeing either.

It occurs to me that I may have more luck on a tide-pool hunt guided by naturalists from the Birch Aquarium. There’s one this Sunday (Jan. 12) at False Point. Others are on Feb. 1 and March 1 and 2. 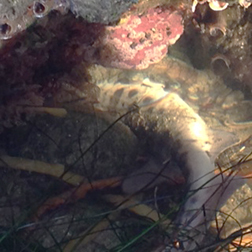 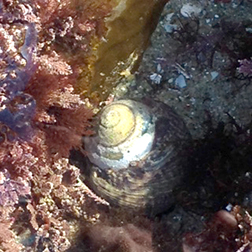