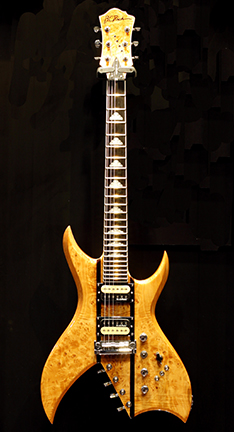 In last week’s blog about gift wish lists, I stated that I had no particular needs beyond hand warmers. That’s no longer the case. I now — Santa, are you listening? — long for a decibel meter. The trick — Santa, you still there? — is that I need one that measures sound up to 190 decibels.

OK, perhaps “need” is overstating my case. I can get along in life perfectly well without being able to verify, should I find myself in the vicinity of a cone spewing forth hot lava, that what I am witnessing is, indeed, a volcano, which emits 190 decibels of noise.

This volcanic decibelogy is something I became acquainted with last night at the Reuben H. Fleet Science Center’s VIP debut of Guitar: The Instrument That Rocked the World. The exhibition, which opens to the public today and runs through April 6, includes interactive displays, such as the one titled It Might Get Loud. According to IMGL, I’m emitting 10 decibels all the time just by breathing, which leads me to wonder if when my parents used to suggest, “Let’s play Little Red Schoolhouse” (a “game” in which my sister and I were to see who could keep quiet the longest), they intended for us to hold our breaths.

Of course, being part of an exhibition geared toward guitars, It Might Get Loud also provided the sound levels for an acoustic guitar (80), which is much quieter than an electric guitar (120) — a point not lost on the father I met who said his young daughter had just taken up the acoustic guitar. Nearby, she was strumming an inflatable likeness of a guitar, which is much quieter than …

Well, yes, I could go on. But that would give short shrift to the extent of the Fleet Center’s newest offering.

I’m sure those who play guitar will be drawn to the display cases of guitars and their brethren, i.e,. the lute and oud (would a hybrid be a “loud”?). But even those, like me, whose strumming talent lies entirely within the confines of the air guitar, can appreciate the beauty of these instruments and read fascinating facts about their histories. For example, the sitar guitar that gave George Harrison’s contribution to “Norwegian Wood” a distinctive twang also was used by The Lemon Pipers in “Green Tambourine.” I’m going to have to pull out my 45 (for you youngsters, that’s a vinyl disc that plays no more than two songs, one on each side) of the latter. (This Buddah Records relic of psychedelic pop could be worth some serious cash one day!).

Guitar aficionados may gravitate to the Gibsons and Fenders. But just for pure visual appeal, I loved the BC Rich Perfect 10 guitar (pictured above) and the Cochran Boostercaster, which looks to me like an instrument for the steampunk crowd.

I learned last night that guitar makers are called luthiers, a term that derives from lutes. They’re not lutiers because the word with an “h” comes from the French language, and the French call a lute a luth. Guitar: The Instrument That Rocked the World includes a replicated luthier’s workshop — specifically that of Robert Benedetto, who, incidentally, is not French.

Harvey Newquist, who is the founder of the traveling National Guitar Museum and who also is not French, told last night’s gathering that San Diego was the seventh stop of the tour and that because a week ago he was in the bitter cold of Yellowstone with the exhibition, “You guys automatically win over Idaho, and we haven’t even opened here yet.”

The science center’s executive director, Steve Snyder, announced a few of the auxiliary components to the exhibition, including an IMAX screening of Rolling Stones at the MAX beginning Dec. 26, The Science of Rock party for adults on Jan. 23 and five live concerts on select Fridays in January, February and March. (For particulars, visit rhfleet.org.)