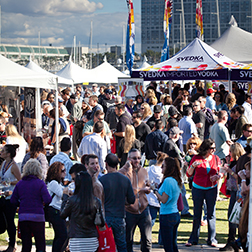 Every once in a while, the core of my very being needs a little indulging. The San Diego Bay Wine & Food Festival gave me that opportunity when I was especially in need of such an opportunity.

Although the forecast for rain threatened to keep me indoors packing boxes for an imminent move (of three miles), Saturday arrived with blue skies. Nevertheless, I packed a hooded wind jacket in a large tote bag before heading for the trolley to Seaport Village.

At the festival entrance, I picked up the “exhibitor” map and began marking which tables I most wanted to visit. I’m not sure why I persist in this exercise of premeditation when I go to a festival, because I inevitably abandon any attempt to follow a plan. It’s easier to just go with the flow.

My first stop was, thus, fortuitous when I came upon a series of wineries from Baja — especially when I spied Philip Gregory, the owner and winemaker of Vena Cava. I met him when SDHG/L put together one of our features on entertaining (published in the November issue). Philip’s wines had impressed me then; I was especially fond of his Tempranillo and was happy to see him pouring it at the festival.

Near him, I discovered another great Tempranillo — this one from a new winery called El Cielo. Meanwhile, Cava Maciel was pouring a superb Merlot. I considered staying “on the hill,” but there were so many other wines waiting for my attention.

Sure enough, in no time a Sauvignon Blanc from New Zealand had my number — literallly as well as figurative. The young woman from Fresh & Easy pouring the Pebble Bay label delighted me with news that was as refreshing as the wine: It retails for around $6 a bottle! Another Sauvignon Blanc that tickled my fancy came from Russian River Valley’s Balverne winery, whose Pinot Noir I also relished.

There were many wonderful wines being poured — some were well-known friends of mine, some were acquaintances and some seemed destined for entrée to my home.

In the same area, I met Rick Richards, owner of Rred Gallery & Wine Bar in Hillcrest. I told him that I had, just within the past week, written the name Rred Gallery on a yellow Post-In Note. Rick opened the art gallery and wine bar in May, but I had just learned of it. As we talked, I discovered that he’s planning an exhibition for an artist I know in La Jolla.

In addition to the wine component of the festival, I enjoyed the food. There certainly was plenty of it. Hot and savory dishes were abundant, and I’ll admit to consuming enough sweets to put a frown on the face of any doctor or dentist. But, as I prefaced, occasionally I need to indulge. And judging by the crowd at the festival, apparently so do a lot of other people.