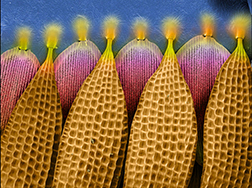 I can delight in a macro view of a butterfly wing (shown above), which looks like a painting I could hang on my wall. But there’s not much else I want to see close up. Crawford High School alumnus (class of ’68) Louie Schwartzberg made that clear to me.

Also a grad of UCLA Film School and an acclaimed filmmaker specializing in time-lapse and high-speed cinematography, Louie appeared last night at the West Coast premiere of his new IMAX film in the Heikoff Giant Dome Theater at the Reuben H. Fleet Science Center in Balboa Park.

Mysteries of the Unseen World represents a visual cornucopia of things that are either too small or happen too slow or too fast for the naked eye to see.

If I might use “infinitesimal” and “gross” simultaneously to describe the same thing, that’s how I would identify mites, lice and bacteria that find themselves comfortably at home on human bodies. What I found most disturbing in Mysteries of the Unseen World was a macro view of mites in human eyelashes. It’s enough to make one consider washing their eyes in synergized pyrethrin. Raid, anyone?

As for things that are too slow, we’ve all seen time-lapse photography of clouds, sunrises, sunsets, flowers blooming, flowers withering, buildings being constructed and more. If you have no life, you can even watch paint dry on YouTube. Watching time-lapse videos is always entertaining — unless, of course, you are watching a mite in macro time lapse.

My favorite part of Louie’s film was the section on things that are too fast for the naked eye to capture. Something as simple as a drop of water is beautiful, fascinating and revealing.

Louie told the audience at last night’s screening that it was his first opportunity to see his film on a dome screen. Mites, lice and bacteria aside, I love the way a dome screen envelops you in the visual experience. The Fleet’s 76-foot screen is especially ideal for Cosmic Collisions, which concludes a one-year run on Jan. 19.

The above image is from Mysteries of the Unseen/Courtesy Reuben H. Fleet Science Center.