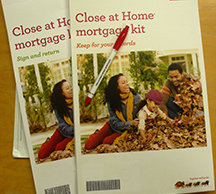 When I opened the FedEx package, a red and white pen spilled out onto the floor (yes, I’m going with spilled, as if the pen was a liquid, which, of course, it is in a way, since the part of the pen that makes it useful is the ink).

“How cute!” I thought. Seriously, I not only thought that, but said it aloud. The bank that sent me refinancing documents apparently assumed that even though I owned a home I did not own a pen. I do, in fact, own many pens, Wells Fargo, so couldn’t you have included a toaster, blender or food processor — items banks used to give customers for bringing them their business. I have a toaster, blender and food processor, but not as many of those items as I have pens. Hey, how about a stagecoach, Wells Fargo? I don’t have even one of those.

Of course, the bank did not send me a pen (or stagecoach, et al.) as a “thank you.” The PaperMate is a non-cartridge-refillable pen, but one could assume it holds enough ink to accommodate the signing of the documents contained in the FedEx package.

Even more amazing than the acquisition of a new pen via FedEx is the fact that I actually read every page of the Close at Home® mortgage kit. OK, I’ll admit I skimmed many paragraphs, especially the ones in bold type just to be ornery. This is not entirely true either, as I am no longer a teenager whose hormones compel them to rebel against anything that remotely resembles authority. As a responsible adult, I understand the potential risks of ignoring bold (as well as italicized) print.

I found it odd that the Borrower’s Title Affidavit had specific sections relating to properties located in Florida and Texas. I had to read those sections purely from the standpoint of curiosity. Were there exclusionary provisions relating to insuring against property damage caused by mosquitoes, alligators, snakes or errant 10-gallon hats? I would reveal the answer, but you may find it more intellectually satisfying to research this poignant question on your own.

The pages in total were not numbered 1 through whatever, so I don’t know how many pages I actually read/skimmed. I think it’s safe to say they numbered somewhere between Green Eggs and Ham and War and Peace length.

I wonder if anyone who is not a lawyer reads every word in these sorts of documents. I wonder how many people at banks have read every word in their documents. I think I may keep these documents by my bedside for the occasional incidents of insomnia. And who knows? I could discover that I overlooked the clause that specifically states that the cost of the pen included in the Close at Home® mortgage kit was added to the principal owed on the house.