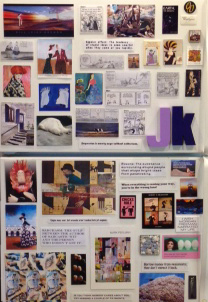 “I wish Morgan Freeman narrated my life.” A magnet with those words is one of the latest additions to my “Refrigerator Collection.”

At heart, I am a casual minimalist. That is, I like color and lots of paintings and photographs on the wall, but I don’t like cluttered horizontal surfaces or elaborate furnishings in my personal space. When it comes to my refrigerator, however, I follow the “more is more” design principle.

Certainly I admire kitchens where the refrigerator is “hidden” because its front matches the surrounding cabinetry. But I have the more utilitarian (textured white) version of an icebox in both my Palm Springs house and my San Diego apartment. So I use them like I use other vertical surfaces: as a place to display artwork. Thus, I love magnets.

Last week, Community Development Director/Account Executive Liz Crocker and I went to a reception at Bliss 101 in Encinitas. The store is filled with reclaimed-wood furniture, works by local artists, all manner of functional and décor accessories, books and even clothing. The tango music playing was identical to CDs I often listen to at home, so I was engaged. But after browsing the store, I gravitated back to the magnet carousel that had caught my eye earlier. Liz and I stood at the carousel reading magnets and laughing.

In addition to the Morgan Freeman magnet, I bought one that shows a picture of a chicken crossing the road. It reads, “I dream of a world where chickens can cross the road without having their motives questioned.”

If that doesn’t make you laugh, then you probably won’t appreciate these gems from my Refrigerator Collection:

Dopeler Effect: The tendency of stupid ideas to seem smarter when they come at you rapidly.

Eagles may soar, but weasels aren’t sucked into jet engines.

Sarchasm: The gulf between the author of sarcastic wit and the person who doesn’t get it.

Not everything on the fridge front contains words. There are photographs, art exhibition cards, cutouts from greeting cards I’ve received, etc. I have a roll of magnetic strip that I can cut to make a magnet out of anything. I even made a magnet out of a small (3-inch-square) encaustic painting I created at the Laguna Design Center Fall Market.

I’ve made magnets of comic strips that I’ve cut from the newspaper, copied onto white paper and laminated. Believe it or not, I don’t have a dishwasher in Palm Springs, but I do have a laminating machine. When I remodeled the kitchen, I decided I would rather have cabinet space than a dishwasher. I use the dishwasher in my San Diego apartment to store plastic bags and recycling items until I take them to the recycling bin. On the other hand, my laminating machine serves the purpose for which it was designed.

But I digress. Back to the comics. The multipanel ones I have are mostly Dilbert. Here are a few examples of the one-frame comics I like:

Drawing of a couple standing on the side of a highway. She says, “I think it’s time we told our highway it’s adopted.”

A guy on the phone in front of a computer. The bottom is labeled, “Tech Support Made Easy.” Guy on the phone is saying, “Go to the Preferences folder, click on the pull-down menu, find the option that says, ‘Nothing Works Right’ and uncheck it.”

Two cats on a sofa. One has the Bible open and says to the other cat, “Well, I don’t see anything specifically stating that all dogs go to heaven.”

If you aren’t chuckling yet, you aren’t hopeless if the one I’ve posted below at least makes you smile. And just so I don’t get accused of guy bashing, let it be known that this magnet was a gift to me from a male friend who appreciates what he calls “chick thinking.” 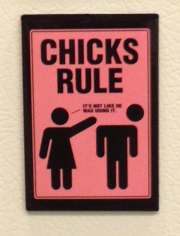 The small print reads, “It’s not like he was using it.”