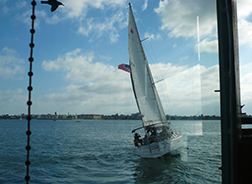 A flood of memories washed over me as I sat by the window — perched over the water at Pier Cafe in Seaport Village. Sipping a glass of chardonnay on a Sunday afternoon … watching sailboats, kites and birds make the most of the coastal breeze … listening to The Knack’s My Sharona: all the elements were there to make one’s brain shift into reverie.

My friend snickered at one novice sailor’s poor attempt to come about. I reminded him that we ourselves had once shown a similar lack of nautical skills. But he claimed we’d never lost all momentum when there was a wind to catch.

It was while I was living in Palm Springs that I learned to sail. One Christmas, I received a gift certificate for lessons from the San Diego Sailing Academy on Shelter Island. After passing that course, I received a gift certificate for the advanced course, which included sailing down to Ensenada. The highlights of the trip were not margaritas, but rather having a little bird “hitch a ride” on my friend’s head when land was nowhere in sight (surely the little fellow must have been plum tuckered out for all the arm-waving he’d had to do to happen upon our boat) and having dolphins swim playfully along our bow.

One time, my friend and I rented a 45-foot boat at Shelter Island and sailed it as far as the Gaslamp Quarter for the Street Scene Music Festival (using the vessel as overnight lodging). Another time, we rented a boat and took my sister, brother-in-law, niece and nephew out for a day on the water; they all got sick.

I’ve only experienced a mild mal de mer three times: once when I was lying on the roof deck of a diving boat off the coast of Cancun, once on a cruise ship in the Atlantic Ocean and once when I was diving along the coast in Monterey Bay and a storm churned the water around me.

Aside from those three instances and residential plumbing problems, my memories of being around water range from pleasant to phenomenal. Though stationary, the Pier Cafe — with its wood siding painted marine gray, a signal flag chart posted where it could conceivably come in handy and all the staff wearing beach-themed shirts (print patterns of fish, surfboards, tropical flowers, kelp, etc.) — “feels” like a boat. Dolphins may not be convinced, but for a moment I allowed myself to fantasize a bit about life on a tropical island, trading in a car for a sailboat, a sofa for a hammock and a coffee mug for a coconut shell. It’s not something I am prepared to do immediately, however.

So in the meantime, I’ll have to spend a few more Sunday afternoons sitting in an oceanfront restaurant or bar. In fact, I think I’ll make it a goal to discover the best San Diego digs for relaxing with the Pacific stretched before me to the horizon. Suggestions are welcome.

P.S. The photo above is not the novice sailor mentioned, but rather a more accomplished boatsman.