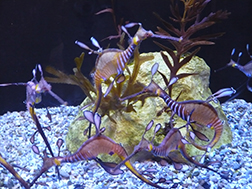 Just what I needed: another reason to travel to Australia. Until I went to La Jolla this past weekend, my list of reasons read (in part) as follows.

Reason 1: It’s Earth’s smallest continent and (under a loose definition) its largest island

Reason 2: Australians have great accents and use funny words

I’ve been holding out for cheap airfare (an admittedly and increasingly remote possibility), but that was before my discovery at the Birch Aquarium at Scripps — a discovery that may have me searching only for “reasonable” airfare.

After spending a fair amount of time in front of the aquarium’s jellyfish tanks taking photos and even more time watching the variety of seahorses (which seems to be the aquarium’s forte), I came upon the seahorse’s relatives: weedy and leafy seadragons, both of which I found astoundingly beautiful. (The above photo shows what struck me as a ballet company of weedy seadragons. The photo below is one of only two leafy seadragons in an aquarium tank, here separated from his/her partner during a pas de deux.) These graceful creatures’ only natural habitat, according to signs on the tanks, is along the south coast of Australia.

I’ve been to several aquariums, including the impressive Monterey Bay Aquarium in Monterey and Aquarium of the Pacific in Long Beach, where larger denizens of the sea command attention. What I got out of my visit to the Birch Aquarium was more of an appreciation for daintier factions of the underwater world. I also left with lots and lots of pictures in my camera. When I edited them later, I found that the “keepers” were images of anemone, jellyfish, seahorses and, obviously, seadragons.

I didn’t even snap one picture of the grotesque wolf eel, which is not found in the waters off the south coast of Australia. 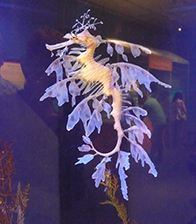