Beauty and the Best 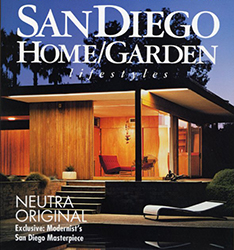 When I read today’s news about the Van Gogh Museum’s announcement of the “discovery” of a Van Gogh painting, the statement that surprised me the most was that “it had been owned by a Norwegian man who had been told it was not by Van Gogh, so he put it in the attic” (emphasis added).

Surely ’tis a pity that millions of people have been deprived of the opportunity to enjoy Sunset at Montmajour, but I find it further disconcerting that even one individual failed to appreciate the beauty of what he had.

As I reflected on this, my mind turned (as it often does) to something that could seem unrelated but for synapses that create a pathway to a platform of consciousness. In this case, the neurons traveled back to Friday afternoon when I joined a tour of modernist homes in San Diego.

I was invited to join the tour by Kim Zakowski, who resides in San Diego but also owns property in Rancho Mirage and Palm Springs. She is a member of PS ModCom, a Palm Springs-based nonprofit composed of individuals dedicated to the appreciation and preservation of modern architecture. Thirty members of the group boarded a shuttle bus and spent three days touring properties in San Diego County. Friday’s itinerary drew attention to the designs of Jonathan Segal, Homer Delawie, Patrick McInerney, Craig Ellwood and Richard Neutra.

At the Ellwood house, owner Keith York (who maintains the modernsandiego.com website) related an anecdote about when his purchase of the property was in escrow. The seller suddenly became aware that the residence had been designed by a noteworthy architect and suggested he would change the price because “this is by some famous dude.” Note, however, that the seller did not want to cancel the sale. Clearly the house is in the right hands now. Keith is passionate about it, which is why he let 30 strangers walk through his personal space.

“People like you” included Robert Imber, who operates Palm Springs Modern Tours and who served for 10 years on the board of the NewSchool Arts Foundation at the NewSchool of Architecture and Design when he lived in San Diego. I asked him what he thought it was about modernist architecture that inspires devotion (and a social one at that).

“It puts one in a living environment,” he said, “and it’s just clean and strong and simple.”

When asked what it is about modernism that attracts him, Rick Mattson sounded the same call: “There is a simplicity to it.”

Rick and Jerry Johnson came from St. Paul, Minn., just for the tour. They’ve been visiting Palm Springs for 10 years, and Jerry joined PS ModCom “to get information about midcentury modernism and go on these tours.” Last year, they joined the tour in Columbus, Ohio.

As they walked through the indoor and outdoor spaces, the tour-goers seemed to “breath in” the homes as they admired the lines and the use of materials.

At the last house on the day’s agenda (which included a cocktail reception), homeowner Tammy Wall explained that when she decided to move from her 1920s French Normandy house in La Jolla, she said to her realtor, “Show me anything that’s architecturally interesting.”

She found the home of her dreams as the fourth owner of the Richard Neutra house that was the cover feature of San Diego Home/Garden Lifestyles in November 1999 (shown above).

The third owner, who owned the house in 1999 and was at the cocktail reception, had been quoted in the SDH/GL article as saying she wanted to share the house with others. Not doing so, she said, would be “like putting a beautiful piece of art in a closet.”

Or an attic? Thank heavens there are people doing research, promoting education and preserving works that speak to us.