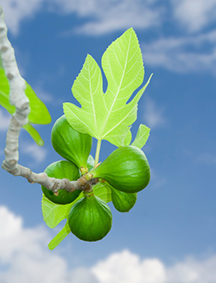 Figs and chocolate; figs and cheese; figs and red onion; figs and prosciutto; figs and cauliflower; figs in mole, compote, panna cotta, scones and biscotti — local chefs and bakers find an array of ways to use a fruit you probably first tasted in a package of Nabisco Newtons cookies.

San Diego’s inaugural Fig Fest offers the public an opportunity to sample the foregoing combinations — and many more — from 4 to 7 p.m. on Sept. 8 at the San Diego Public Market. More than 40 food purveyors and 15 wineries/breweries are participating in the event that came about after Karla Stockli, CEO of the California Fig Advisory Board, and Marie Kelley, president of the San Diego Chapter of Les Dames d’Escoffier, met at Les Dames’ international convention in St. Louis, Mo.

Fig Fest had been held for nine years in Fresno, where the fig advisory board is headquartered. But, Karla says, “Our goal is to create awareness not just here at home, but also across the United States. We are at a point where we need to branch out.”

In addition to the Les Dames connection, San Diego seemed an apropos locale for the festival because figs were first planted by priests at the San Diego mission in 1769, long before the first fig trees were planted in Fresno County in 1885. California produces 98 percent of the nation’s commercial crop of fresh figs (Arizona produces the other 2 percent); and the Central Valley produces 100 percent of the country’s dried figs. According to Karla, almost 50 percent of the fresh fig crop is exported to Canada. Japan, Hong Kong, Taiwan and Singapore also import U.S. figs.

There are six main varieties of figs; and they all have distinct flavor profiles, like wine grapes.

“We encourage people to try them all. The Calimyrna is buttery, nutty and oaky like Chardonnay, with caramel notes,” Karla says. Though Calimyrnas are the most popular, more Mission figs are produced. “[Calimyrna] is the only one that is not self-pollinating,” Karla explains, “so there’s more care needed from a fig grower.”

Figs not only are versatile in recipes, but also enjoy a long growing season. “We started production for fresh figs in late April and will finish in late December. Last year, we finished in late January,” Karla says. “The climate and soils [in California] are ideal for fig orchards to grow and thrive.” Like grapes, figs like diurnal swings in temperature, from 89 to 105 degrees during the day to the 60s at night.

In addition to San Diego County participants, chefs and wineries from Baja will be at the festival to share their own fig dishes and wines. All attendees will receive a program book with recipes from the festival and will have an opportunity to cast ballots for their favorite dishes. Casting ballots enters them into a drawing for gift certificates from local restaurants.

The fig advisory board and Urban Plantations, which cares for dozens of fig tree orchards in San Diego, will be handing out figs and offering information and advice on growing fig trees.