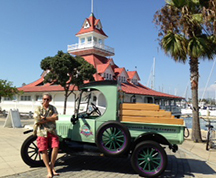 Rabbits as big as dogs, a floating casino buried under the beach, ice plant-covered dunes that spell out their location, houses moved inland when three “century storms” brought waves to their doors, other houses with storied pasts, a ghost in a wedding dress “haunting” an old boathouse — Joe Ditler filled my head with tales and opened my eyes to Coronado Island on a gloriously sunny Sunday.

Joe — who is married to SDGH/L’s managing editor, Eva — has lived on Coronado Island since 1966 and served as president of the Coronado Historical Association, so his knowledge of the area is vast. He offered to give me a tour in Coronado Brewing Co.’s 1924 Model T, which he drives around the island to promote the microbrewery and brew pub (to much success, as the green-and-purple vehicle adorned with CBC’s logo attracts plenty of attention: smiles, thumbs up, waves, photo snapping and even shouts for beer).

Joe’s tour began along Ocean Boulevard, and I asked him about the rocks lining the beach. He told me they were brought in after three “century storms” hit in 1905, but that their functionality has passed, since the shoreline has receded over the years. He told me an industrious city worker almost lost his job when it was discovered that he had, while clearing seaweed from the beach, created dunes that spell “Coronado.” So now people can say, “Meet me at the D.”

At the beach in front of the Coronado Shores condos, Joe took me back to 1936 when floating casinos lined the shore. One of them, named the Monte Carlo, got caught in a gale and the anchor snapped. The ship was blown to the shore and became buried just below the sand (it’s visible at low tide). Joe relayed to me stories he’d heard firsthand from people were there and made off with money and liquor. A couple of men in suits paid someone to swim out and see what he could retrieve; Joe speculates they were the owners who couldn’t come forward to claim ownership because the ship’s new location made its activities (gambling and prostitution) illegal. Joe told me that whenever a story came out about the wreck, the next day he would see adults on the beach with metal detectors and kids with plastic shovels digging away in the sand.

Joe also took me to see two monuments with historical photographs and postcards printed on tiles. Located at the Glorietta Bay Promenade, the “murals” depict the 1900s-era Tent City resort attraction that had a carnival atmosphere. Joe explained how the tents evolved over the years and pointed out images of old rail cars (there’s one privately owned car that Coronado would like to acquire and display, he said). The faces and fashions of the people in posed and candid photographs particularly fascinated me.

Next to the monuments sits the restaurant 1887 on the Bay (shown above behind Joe and the Model T). Joe told me the structure was built as a “template” of the Hotel del Coronado (built in 1888) to prepare the construction crew for the undertaking ahead of them. It served as the hotel’s boathouse, then as the original headquarters for Scripps Institution of Oceanography and then became the Coronado Yacht Club. Later it was a Chart House restaurant and just this year became 1887 on the Bay. Joe, of course, knows people who work there, so we were allowed to walk to the top lookout and enjoy the vista. From the deck, we could even see the dome of the new library in downtown San Diego.

Our last stop was a house that was one of those moved inland after the 1905 century storms. It is being restored now to its former Craftsman glory, but with the addition of a basement. In order to support the weight of the home over a basement, Joe told me, the builder came up with the idea of suspending the floor of the first level from beams.

Joe drove to the end of Orange Street and showed me where ferries used to dock for people traveling to “the mainland.” We drove past Coronado Brewing Co. and back up the boulevard along the medians where trolley cars used to run.

Parked back at his house, Joe told me one last story: the one about how and Eva came to own the 1934 house in which they live.

As I drove back to my apartment, I considered how nice it is to learn the history of the place where you live. The knowledge you gain has the power to instill a sense of connection and help you feel a part of your surrounding community. And you might even have great stories to tell — like Joe.