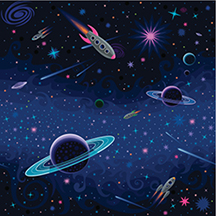 Whoa — don’t jump to conclusions. In fact, I was only drinking coffee.

The aliens (at least those who were identified as such) were not “real” in the sense that they were actors portraying aliens in Simply Sci-Fi, a production of six short plays running Thursdays and Fridays through Aug. 30.

Outside, before the performances, I chatted with New Play Cafe co-founder Kevin Six — actor, director, producer, writer, surfer and former trapeze instructor whose latest projects are Simply Sci-Fi and writing a book about a surfing vampire. (And, yes, I did ask him about the finer points of trapeze flying. He told me that one of SDHG/L’s contributing writers, Mark Hiss, tried it with him once — and apparently found it less pleasurable than others have.)

Kevin introduced me to Bryan Finnigan, one of the evening’s playwrights, and his son Connor, who says his future may be in combining his interests in music and psychology (i.e., music therapy). Bryan, a professional writer whose credits include television (including Big Bang Theory), confided that he wrote his Simply Sci-Fi play, Peripathetic, the same day it was due — the idea of which practically throws an editor like me into spasms. Fortunately, the tactic worked for Bryan in this instance; but, like trapeze flying without instruction, I would caution others, “Don’t try this at home.”

In typical theaters, actors perform on a dedicated stage and the audience sits in rows of seats facing the stage. At Big Kitchen Cafe, performances take place around the two small dining rooms, putting audience members in the scenes. Room 1 sees a set of three plays, while Room 2 sees another set of three plays. Then there’s an intermission and the sets swap rooms.

Simply Sci-Fi’s six playwrights and eight actors did a superb job of providing amusement with a dose of commentary on life and technology. This was the second production at Big Kitchen for New Play Cafe, whose mission is to assist writers get their plays ready for full production and provide them with time and space for a salon-style showcase. (For information, visit newplaycafe.com.)

For the record, Jerry Garcia was no more real than the aliens (at least those who were identified as such). His cardboard cutout figure is part of Big Kitchen Cafe’s cultural pastiche that puts the space into a time capsule of its own. My eyes caught sight of flamingo ceramics on a shelf in front of me. On the wall behind me was a frame with matted photos of Bill, Hillary, Socks, Buddy and the business card of an official White House photographer.

So how interesting was your evening?