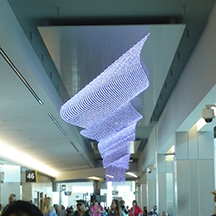 My favorite part of the media tour of San Diego International Airport’s Terminal 2 expansion this week (the public gets tours this weekend) was standing under a wave of 38,000 LED lights and becoming mesmerized by the birds flying across the 700-foot-long ribbon — a clever application of lighting technology by San Francisco-based artist Jim Campbell. (While I suppose some folks will enjoy the variety of The Journey [shown above] also showing people dancing and swimming, I prefer birds to people over my head.)

Canadian artist Stuart Keeler’s Taxonomy of a Cloud also impressed me as an overhead sculpture — this one made of aluminum tubing and 365 strands of Swarovski crystals (who doesn’t like crystals?).

I was pleased to find that a local artist was represented in two large installations. The works by Joan Irving were in the airport’s collection prior to the terminal expansion, but have been relocated: Sunlight Juxtaposed (a curved, 25-by-50-foot window with colored geometric shapes that appear to be random but obviously were carefully planned) and Paper Vortex (glass panels with a paper airplane motif).

One piece that I like I didn’t even see, as it apparently is still a work in progress. I’m basing my preconceived opinion of local artist Roy McMakin’s conceptual piece merely on the title: Several Windows From Around San Diego That Caught My Eye Prior to Moving Back (Poignantly One is From Windemere Cottage, Which Was Torn Down).

The media tour encompassed much more than public art, of course. There are new gates, a new upper-level roadway with check-in counters, a new ticket lobby, a new security checkpoint, a new baggage-claim area and a new food concession area. But those elements without art would be a much less fulfilling experience (not that giving up possession of your personal belongings with the hope that you will be reunited with them in another locale or that having your purse and body X-rayed are fulfilling experiences).

Relatively fresh from my encounter with public art at the airport, I was all the more compelled this morning to stop by the Public Art Matters exhibition (Aug. 8-11, 11 a.m.-4 p.m.) at Woodbury University School of Architecture in Barrio Logan.

Miki Iwasaki, who created the Signalscape art over the airport’s Terminal 1 baggage-claim area and who teaches at Woodbury, explained to me that Public Art Matters initiated in artists’ reaction to the Board of Port Commissioners slashing the next fiscal year’s budget for public art from $1.2 million to $600,000. But local artists and art-related organizations ultimately created the exhibition to raise awareness about public art in general. Depoliticizing issues is a rare step these days.

I talked with Chris Puzio, whom I’d recently met at a tour of the public art at the County Operations Center, where he has two sculptures hanging. In May, his large sculpture Island Arbor was dedicated outside Tom Ham’s Lighthouse restaurant on Harbor Island. He told me the Baumanns, who own the restaurant, are great supporters of art. They also own Bali Hai on Shelter Island, which features an exterior installation by Miki.

I also enjoyed a conversation with Patrick Shields, an artist who recently moved to San Diego from Los Angeles and teaches at Woodbury. He had a proposal “short listed” by the port district — a structure that he has envisioned as having multiple applications. (Dolphin translation? Helloooo, who doesn’t want that?)

In any event, as I viewed proposals, models and photographs of artworks throughout San Diego, I thought about my own experiences with public art. I served on the public arts commission in Palm Springs and have many artist friends and acquaintances that have public art installations. But it’s just when I’m driving or walking in public and see something besides street signs and buildings that I most appreciate how art makes our spaces — outdoors and indoors — more beautiful, more compelling, more thoughtful and more enjoyable.

There could have been no better title for the Woodbury exhibition, except, perhaps, a la McMakin, Public Art Matters Even More Than Frappucino, Facebook and Free Parking (Poignantly One Rarely Values Anything More Than Free Parking).