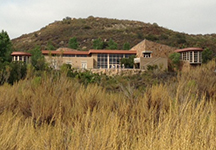 My bad knee (for the insatiably curious or detail-oriented reader, that would be the right one) reminded me this weekend that it was bad. It doesn’t particularly like me to push it to a certain level of use. But I don’t care; I enjoyed every moment of getting there.

Perhaps it wasn’t necessary to hit the gym prior to hiking, but I wanted to catch the Wimbledon finals matches and I don’t subscribe to cable or satellite television. My apartment complex does, however, so I watched the live match from the All England Club on the treadmill and elliptical TVs.

After Saturday’s workout, I drove to Mission Trails Regional Park, which Associate Publisher Mike Evans mentioned on Friday when I expressed my desire to find a place where I could enjoy peaceful wilderness. I’d tried Torrey Pines State Park on July 4th. It offers beautiful scenery, overlooking the ocean; but walking the trails with people chatting away is not my personal idea of hiking. I am used to the solitude of the mountains and deserts in and near Palm Springs.

As soon as I arrived at Mission Trails, I knew I had found an environment that I would want to explore again and again. I began on the Visitor Center Loop Trail. When I reached a swampy area, I heard the sound of wildlife. It wasn’t a sound I recognized, but I was certain it did not come from a bird, a bug or a reptile. I looked around, but saw nothing. I was curious, but not enough to wade through the swamp, which, I suspect, park officials would frown upon. The only mammal that came to mind (based on the sound) was a hippopotamus, the suggestion of which, I further suspect, park officials would laugh over.

Having for many years been a rock climber (not a professional one, but a decent one), I was drawn to the Climbers Loop Trail. The sign indicated it was steep and not for sissies (OK, it didn’t say “sissies”). But I was looking to gain some altitude, and I’m in good shape (albeit having a “bad knee”). I hoped to find some climbers, which I did. But mostly I just wanted to get up on the hill and see the rocks.

From the Climbers Loop Trail, I got a good view of the visitor center (shown above, but from a closer vantage point). It is stunning architecturally and in its scope. Architect Joseph Wong designed the center, as well as the San Diego Convention Center sails pavilion enclosure, Renaissance Marriott and Hilton San Diego. The visitor center won the San Diego Architectural Foundation’s Orchid Award in 1995.

There’s a great viewing deck, an amphitheater where free live music concerts are presented the third Sunday of the month, a butterfly garden and more outside. Inside are displays about the geography, flora and fauna; rotating art exhibits; and a stocked library where you can sit and read and occasionally gaze out upon the vista. I was tempted to hike another trail, but I had afternoon errands to run.

Sunday morning, I was back at the fitness center for the men’s finals at Wimbledon. After a late breakfast, I drove to Coronado to walk on the beach. I took off my sandals and walked in the soft, loose sand before wandering down to the firmer sand at the water’s edge. Then I took my first steps as a San Diegan into the Pacific Ocean.

My first thought was that the water was cold and I would not be one of those people in swimsuits in water up to their armpits. I know it’s an acclimatization thing. I’ve been a desert rat for so long that it’s going to take me a while. However, my feet did eventually get used to the water temperature; at one point, the water even dampened the bottom edge of my shorts.

I had not taken a book, a beach towel, an umbrella, a picnic or any other accouterments. So after I’d walked up and down the beach a while, I sat down on the sand and called Managing Editor Eva Ditler, who lives on Coronado, to see if she would like to join me for a glass of wine at the Hotel del. She was out, so I chatted a bit with her husband, Joe. When I told him of my inaugural “getting my feet wet,” he responded that it was too bad there was no witness (I assumed he meant other than strangers). So I told him I would go back and take a photo with my iPhone.

That was not as easy as it sounded, so I stopped someone walking along the beach and asked her to take my picture. The results of my shot and hers are below. Also below, is a photo I took of a mother and her children that I really like. 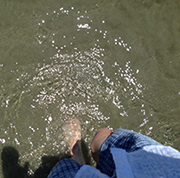 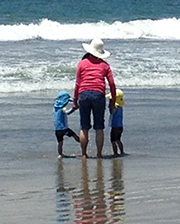