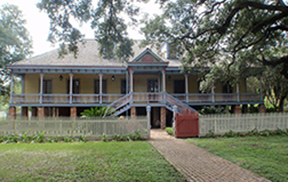 When I imagine a Southern sugar plantation homestead, my mind automatically envisions an antebellum mansion with decorative pilasters, gables, broad verandahs and tall, thick columns. That’s why I was a bit taken aback when I visited the French Creole residence known as The Laura Plantation House in Louisiana. It didn’t look anything like Gone With the Wind’s Tara.

First of all, the stately columns I expected to see were, on this house, anorexic. Instead of a tall, regal structure, what stood before me was a squat, on-the-wide-side country home.

But don’t let that description fool you. I wasn’t disappointed. Although simpler in style, this house had knock-your-socks-off color. That’s because the Creoles wanted to make certain that no one mistook them for Anglo-Saxons. Rather than copy the lily whiteness of their predictable neighbors’ plantation homes, they whooped up their residences with vibrant paints. The Laura Plantation House is happy yellow with a sky blue and rusty burgundy trim combination and what looked to me like a bright pink medallion over the entrance.

The tour guide explained that the front of the home was divided by gender with the left-hand rooms used as a gentlemen’s parlor and bedroom and the two right-hand rooms reserved for the ladies. The back of the house was used as a communal parlor and for dining.

Interiors were brightly colored, but sparsely furnished. A grand central staircase with a curved baluster is nonexistent, but just because the architecture isn’t fancy doesn’t mean the floor plan isn’t intelligent.

The house relies on cross-ventilation to handle the sultry heat of Louisiana summers. With no hallways, the two rows of five rooms open directly into each other; and each room has exterior double French doors, as well as other interior openings.

When the tour guide took us to the raised basement, she showed us structural frames with Roman numeral markings that builders used to match beams and joints. She said constructing the house was like putting together a Tinkertoy project: “Everything is precut, premeasured, notched and pegged.”

Brighter still were the women who ran this estate. Four generations of women owned The Laura Plantation and managed its daily operations. So, in a way, the Creoles were progressive for the time. But then, of course, there were the slaves who lived in the back shanties. I toured those pitiful one-room shacks too, but that’s another story.